(Room is on the ground floor of the main building. Campus map.) 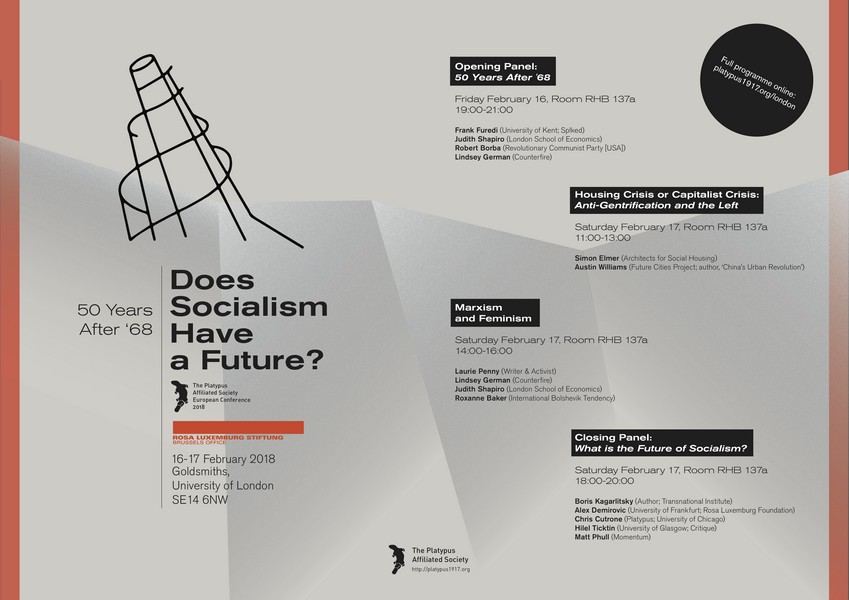 For half a century, 1968 has represented a high-water mark of social and political transformation, a year of social upheaval that spanned the entire globe. Ushered in by a New Left that sought to distinguish itself from the Old Left that emerged in the 20s and 30s, the monumental events of 1968 set the tone for everything from protest politics to academic leftism.

Today, with the U.S. entangled in a seemingly endless war in Asia and people calling for the impeachment of an unpopular president, with activists fighting in the streets and calling for liberation along the lines of race, gender, and sexuality, the Left’s every attempt to discover new methods and new ideas seems to invoke a memory of the political horizons of 1968. We can perhaps more than ever feel the urgency of the question: what lessons are to be drawn from the New Left as another generation undertakes the project of building a Left for the 21st century?

What is the Future of Socialism?

The recent polarisation of politics, in the UK manifested around Corbyn and Brexit, has led some commentators to herald the end of neoliberalism. This undetermined moment has been welcomed variously as a potential opening for emancipatory politics, political engagement and a renewed imagination of 'socialism'. For others, it has been received with belligerence, as a turn toward a new, populist right. This panel discussion aims to clarify the range of Left perspectives on the question of the future of socialism today.

Anti-Racism in the Age of Trump and Brexit

Beneath a consensus of avowed anti-racism, the Left remains conflicted about whether and how to politicise race, often placing its hopes in the Democratic and Labour Parties to vouch for better democratic representation of the underprivileged. How could the politics of anti-racism advanced the struggle for socialism and the pursuit of freedom given the recent political changes?