[N]egative dialectics seeks the self-reflection of thinking, the tangible implication is that if thinking is to be true—today, in any case—it must also think against itself. If thinking fails to measure itself by the extremeness that eludes the concept, it is from the outset like the accompanying music with which the SS liked to drown out the screams of its victims.

NEGATIVITY AND REVOLUTION seems to fly in the face of the Adorno revival over the last twenty years. The editors bravely assert in the introduction to their book that their focus will not be on Adorno, nor about the body of his work, and, above all, that it is not written by Adorno specialists. The intent of this book, which is the outcome of a seminar at the Instituto de Ciencias Sociales y Humanidades Alfonso Vélez Pliego of the Benemérita Universidad Autónoma de Puebla, is to elaborate on what Adorno called negative dialectics and how it might serve as a counter-strategy to other forms of theorizing the present, and could thus be of benefit to radicals, political activists, and Adorno scholars. 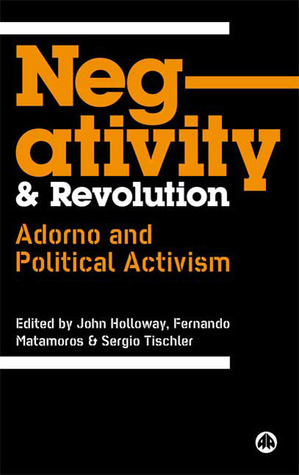 The attempt to maneuver Adorno’s thought into a place of relevance in the lifeless field of radical politics is, I think, a very worthwhile endeavor. However, the reader quickly confronts the danger of prioritizing Adorno’s Negative Dialectics, which is that the concept of negative dialectics itself is much abused and misunderstood. Another, secondary impediment, is the fact that Adorno is still vilified by many on the Left for having called the police when the Frankfurt Institute was occupied by the student movement in 1969, and for agreeing with Habermas’s formulation that the students were “left-fascist.” This book asks, Why is Adorno a hero of revolution and political activism? For one of the editors, John Holloway, Adorno’s concept of negative dialectics and its Hegelian pedigree offers an enticing vision of theoretical depth that is “both libertarian and revolutionary.” He argues

It is libertarian because its pivot and driving force is the misfit, irreducible particularity, the non-identity that cannot be contained, the rebel who will not submit to party discipline. It is revolutionary because it is explosive, volcanic, and refuses compromise with the capitalist totality. If there is no identity other than the identity that is undermined by non-identity, then there is no possibility of stability. All identity is false, contradictory, resting on the negation of the non-identity which it suppresses, which it seeks to contain but cannot. (13)

For Holloway, Adorno’s concept of non-identity, elucidated most rigorously in Negative Dialectics, is “the hero, the centre, the moving force of the world.” By contrast, Gilles Deleuze’s Difference and Repetition, published in 1968, distances itself from the dialectical legacy of Hegel and the arguments of Adorno, arguing that

History progresses not by negation and the negation of negation, but by deciding problems and affirming differences. It is no less bloody and cruel as a result. Only the shadows of history live by negation: the good enter into it with all the power of a posited differential or a difference affirmed…. That is why real revolutions have the atmosphere of fêtes. Contradiction is not the weapon of the proletariat but, rather, the manner in which the bourgeoisie defends and preserves itself.[1]

By contrast, the emphasis throughout Negativity & Revolution is placed on rescuing the negative dialectical moment from the short-circuiting of theory by the demands of practice, “a practice which in its anti-theoreticism is left at ‘the prey of powers,’ whether that of charismatic leaders or revolutionary parties” (35). While there have been attempts to bridge the gap between theory and practice in the work of Adorno, for instance Espen Hammer’s Adorno and the Political (2005), this book presents a unique spectrum of the political application of Hegel and negative dialectics to the twenty first century and an attempt to negotiate the Scylla and Charybdis of neo-liberalism and anti-dialecticism.

Theodor W. Adorno (1903–1969) was one of the key leaders of the Frankfurt School of Critical Theorists that emerged in Germany between the world wars and played a crucial role both in the re-establishment of Marxian Critical Theory in post-WWII Germany and in providing intellectual inspiration to much of the New Left in Western Europe and North America during the same period. This Frankfurt School group was instrumental in developing variations in Marxist theory that had neither the vulgar, didactic quality of the “official Marxism” of the Soviet Union in the late 1920s and early 1930s, nor the progressive evolutionary quality of the late nineteenth century Second International Marxism. Both of these forms of Marxism were seen by the members of the Frankfurt School as a fundamental betrayal of dialectical materialism as Georg Lukács elaborated in his important book History and Class Consciousness and as found in Marx’s so-called humanist manuscripts of 1844 that were rediscovered in the early 1930s. Both of these publishing developments gave renewed emphasis to the Hegelian dialectic within Marxism, but with a twist. Whereas in Lukács’s Hegelian Marxism one could assume that the working class was available as the potential subject of history that would lead to the overthrowing of its antithesis, for the members of the Frankfurt School, the rise of Hitler and Fascism as well as the destruction of the working class as a potential subject of history meant that the Hegelian dialectic needed to be rethought in the absence of a powerful counter-subject to capital. As suggested in Negativity & Revolution, what would later emerge as a full-blown theory of negative dialectics that culminated in the book by the same name in 1966 is indistinguishable from the question of practice. However, equally inseparable from the thought of Adorno is Lucács’s elaboration of the concepts of totality, reification, and the commodity. 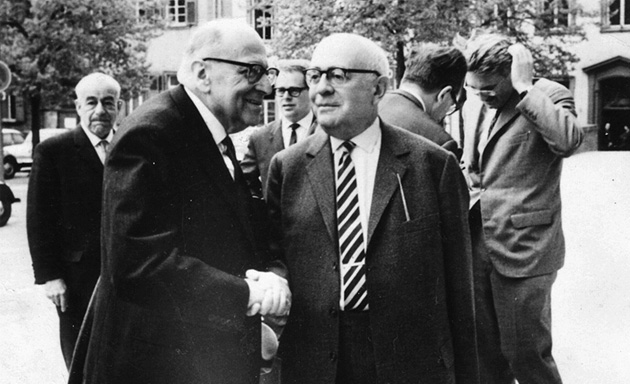 Horkheimer (front left) and Adorno at the Max Weber-Soziolo- gentag, with Habermas (back, far right) and other students.

Adorno, whose early training in the European Enlightenment philosophical tradition began at fourteen when he started studying Kant’s Critique of Pure Reason with Siegfried Kracauer, was an accomplished musician as well as philosopher who studied modernist piano technique under the guidance of Alban Berg, whom he had met in 1924 when he was completing his doctorate. This intertwinning of philosophy, aesthetics, and music imparted to Adorno a unique skill set that, I would argue, to this day is what gives Adorno’s work such longevity, theoretical vibrancy, and ongoing relevance. The mutual interaction and contrapuntal intricacy of these different registers in the various modes of his thought and compositional technique within his writing are seldom legible to contemporary writers.

Ironically, Adorno’s admiration of Lukács would come after the latter had recanted his youthful work, including History and Class Consciousness. Thus, by the time Adorno appropriated many of Lukács’s concepts, Luckás summarily dismissed Adorno and his colleagues as occupying “the Grand Hotel Abyss,” a caricature meant to mock their culturally elitist positions as well as their distance from any meaningful relationship between theory and practice. This dismissal was easily adopted by many members of the New Left in Europe and North America in the 1960s and, from a different theoretical perspective, by many practitioners of postmodernism and post-structuralism who perceived in the work of Adorno a rigid adherence to a kind of Hegelian Marxist doctrine that was seen to be totalizing, elitist, and pessimistic. Even Adorno’s most well-known student, Jürgen Habermas, distanced himself from the Hegelian philosophical and utopian idealism implicit in his mentor, in favor of the kind of social science popular in mid-century America, tinged in various ways with the tradition of pragmatism, as well as an intersubjective theory of communicative reason that sought to displace subject-centered language models. In addition, followers of the French post-structuralist theorist Gilles Deleuze and his “politics of difference” or the students of Antonio Negri, Michael Hardt, and Paolo Virno, who pursue a concept called “the politics of the multitude,” all claim to have found a more productive and direct route to radical change that avoids the dialectical legacy of Adorno. Even in the current, more radicalized atmosphere of the Occupy Wall Street era, there is immense pressure to move towards forms of praxis that bypass the impediments to direct action that Adorno’s theories would seem, as a function of their overtly negative political outlook as well as their almost impenetrable complexity, to pose.

The weakest sections of Negativity & Revolution are those dealing with art and its relationship to politics. Adorno, who was working on his magnum opus Aesthetic Theory when he died of a heart attack after hiking in the Swiss Alps in 1969, was specifying how aesthetics inflects his political and theoretical analysis. Assuming that Adorno’s aesthetics reflects his philosophy rather than informing it profoundly, on the level of form and content, what this book fails to consider is, How does Adorno alter our understanding of the relationship of negative dialectics, as well as art, to revolution and political activism? A book dealing with the subject of art and negative dialectics is vitally important at this historical juncture, when increasing demands for more “relevant” forms of political art threaten the kind of critical tension and dialectical negativity that Adorno’s aesthetic theory implies. |P