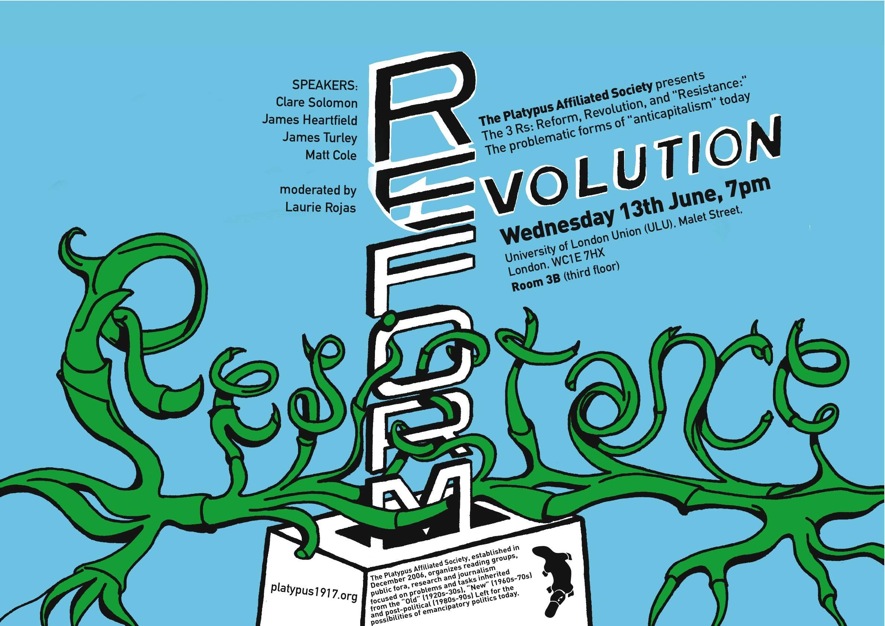 “[After the 1960s, the] underlying despair with regard to the real efficacy of political will, of political agency [. . .] in a historical situation of heightened helplessness [. . .] became a self-constitution as outsider, as other [. . .] focused on the bureaucratic stasis of the [Fordist/late 20th Century] world: it echoed the destruction of that world by the dynamics of capital [with the neo-liberal turn after 1973, and especially after 1989].

The idea of a fundamental transformation became bracketed and, instead, was replaced by the more ambiguous notion of ‘resistance.’ The notion of resistance, however, says little about the nature of that which is being resisted or of the politics of the resistance involved — that is, the character of determinate forms of critique, opposition, rebellion, and ‘revolution.’ The notion of ‘resistance’ frequently expresses a deeply dualistic worldview that tends to reify both the system of domination and the idea of agency.

‘Resistance’ is rarely based on a reflexive analysis of possibilities for fundamental change that are both generated and suppressed by [the] dynamic heteronomous order
[of capital]. ['Resistance'] is an undialectical category that does not grasp its own conditions of possibility; that is, it fails to grasp the dynamic historical context of which it is a part.”

1. Since the 1960s, and especially since the 1990s, struggles for social, economic and political emancipation have been conceived less in terms of structural reforms or revolutionary transformation and more in terms of “resistance.” How do you define “resistance” and how do you understand its role in possibilities for social change?

2. One powerful way “resistance” has been conceived has been in terms of “culture” and practices of “everyday life.” How do you understand the implicit (if not explicit) distinction thus made of politics directed at society as a
whole, from the more apparently mundane concerns and stakes of quotidian existence?

3. What, in your understanding, are the reasons for and the consequences of this historical shift away from movements for reform or revolutionary politics, to tactics, strategies, and self-understandings in terms of “resistance?”

4. Where do the new forms of politics of “resistance” point, in your estimation, for social-emancipatory possibilities, today and in the future?

5. What kinds of change do you envision on the horizon of present social concerns? How do you imagine the potential manifestations of such change?

6. What can and should those on the Left — those interested in working towards social emancipation — do, tactically and strategically, in view of such possibilities for change?

Since 2007 Platypus has been organizing a series of events on The 3Rs. Click on the date/location to go to the audio: