To the shores of Tripoli: Tsunamis and world history

"AFTER ME, THE DELUGE," the saying attributed to Louis XV (1710–74), would have been better said by his son and heir Louis XVI, who was soon thereafter overthrown by the French Revolution that began in 1789.[1]

Muammar Qaddafi has said something similar, that if he is overthrown Libya will be condemned to chaos. Qaddafi even claims to be fighting off "al-Qaeda." Perhaps he is. 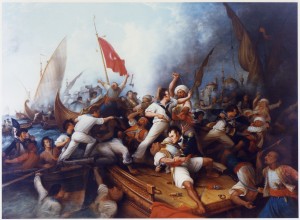 On the one hand, this is all clearly self-serving on Qaddafi's part. On the other hand, the kernel of truth in such a statement, specifically with regard to Libya, might bear scrutiny.

The U.S. administration that attacked Libya before Obama was that of Ronald Reagan. Reagan's foreign policy advisor and United Nations ambassador, Jeane Kirkpatrick, famously distinguished between "authoritarian" and "totalitarian" dictatorships, and thought that the U.S. should support the former and oppose the latter because of the relative ease with which the former could transition to democracy as opposed to the latter, whose pathology ran deeper, and so the effects would prove more lasting obstacles to freedom.

The comparison of Libya to its neighbor Egypt in the recent uprising against Mubarak seems to prove Kirkpatrick's point. Egypt seems poised on a relatively painless transition to democracy, while Libya portends a much darker future, with or without Qaddafi. One might also, for good measure, point out the more intractably "totalitarian" tyranny of the political regime in the Islamic Republic of Iran, whose potential democratic replacement is also highly uncertain, not least because its Islamic Revolution in 1979 was "democratic" in ways that the origins of the Egyptian or Libyan regimes were not.

Many of the former republics of the USSR after the collapse of Stalinism are as well.

But what is the point of saying so?

The potential further development of Libya after the passing of Qaddafi suggests something darker than what happened after “People's Power” in the Philippines, in terms of violence and other forms of overt brutality—as opposed to the "softer" brutality that continues to prevail in the Philippines, as elsewhere. Libya may become more like Somalia. Or Yemen. Or Afghanistan or Iraq. Who knows? 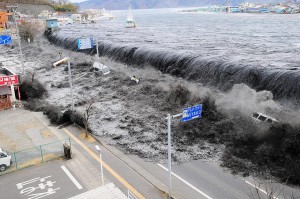 If Qaddafi thought that the tsunami that hit Japan would distract the U.S. from attacking his regime and allow suppression of the rebellion in Libya, he was mistaken. Rather, Qaddafi underestimated the global deluge of capital, at whose leading edge the U.S., for better or worse, operates. The flood was not to spare Qaddafi. It always stands poised to crash, cresting menacingly somewhere off shore. The rebels in Libya may have wished it to rain down on Qaddafi like a Biblical plague on the Pharaoh, tearing down the pride of his sinful glory. It will. But it may not spare them, either. There is little if any justice to history. Especially to a place like Libya, history happens.

Protest against the U.S./NATO/UN bombing of Libya is no less hopeless than Qaddafi is. 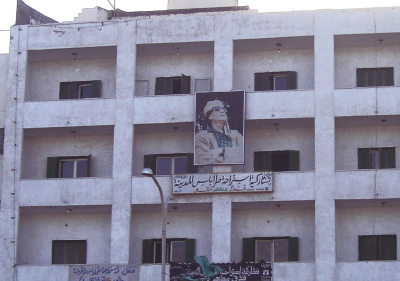 Qaddafi's regime was, like Marcos's in the Philippines—and the "totalitarian" regimes of the USSR and Eastern Europe, China, Korea, Vietnam, Cuba, etc. that Kirkpatrick and Reagan opposed—a "modernizing" project. Horrifically so. Perhaps this is what Kirkpatrick actually had in mind in her distinction between "authoritarian," meaning more traditional, and "totalitarian" dictatorships—and why the former would end up being more benign than the latter. Perhaps. 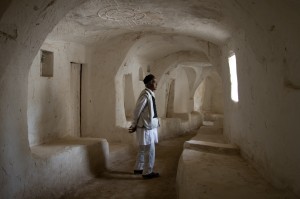 Qaddafi moved the Berbers out of their traditional community in Ghadames into new apartment buildings. The ancient city—hallucinatory in its cavernous complexes—was left intact and preserved as a cultural museum. It still stands, alluring next to the decrepit hovels the modern high-rises have become. Perhaps the Berbers will return to their ancient city, evacuated by Qaddafi. But really it is no longer there, even if it remains in Libya. The deluge has not spared it. Nor will it. The only difference is how hard the wave might hit. |P