“It was not the economics of Communism, nor the great power of trade unions, nor the excitement of underground politics that claimed me; my attention was caught by the similarity of workers in other lands, by the possibility of uniting scattered but kindred peoples into a whole.”
— Richard Wright, Black Boy

RANDI STORCH’S RED CHICAGO takes to task prevailing caricatures of American Communism during the so-called “Third Period” of the late twenties and early thirties, a period in the history of American Communism frequently criticized for its growing ideological rigidity, its organizational Stalinization, and its ultimate failure to revitalize the flagging world revolution and to check the threat of fascism. Against such views, Storch argues historians have been unfair to the early Chicago Communists, falsely constructing them either as mannequins manipulated by Soviet puppeteers, or else as heroic defenders of the city’s working class, a collection of hyper-romantic organic radicals whose every breath stood in defiance of both employers and the party itself. Storch, whose political imagination is less that of a historian than an anthropologist, attempts to resist these tendencies by uncovering the stories, personalities, and politics of Chicago’s Communists with more nuances in mind than the usual Stalinist, anti-communist, or anti-Stalinist histories. In place of the old preoccupations, Storch proposes parallel analyses of Soviet policy during the Third Period and local stories and practices of party organizers, members, and affiliates. In so doing, Storch postulates that party leaders, youth organizers, workers, and intellectuals each wished to paint the town red, albeit with different hues. Posing an inquiry as to how and why Chicago Communists’ crimsons, corals, roses, and maroons maintained their distinct character as part of a red Chicago offers an opportunity to interact with the fractures and complexities Communist politics assumed in its turn towards Stalinism. 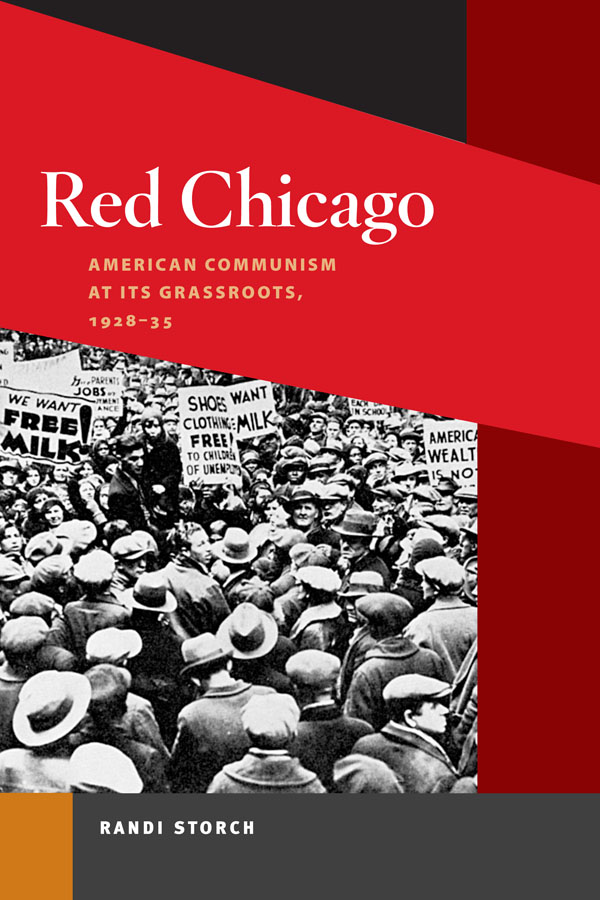 In one sense, the combination offers insight into “the period’s broader social and political context and calls attention to the social, political, economic, and cultural forces that shaped American working-class life from the 1920s through the mid-1930s… [and explains] why and how ordinary people became radicalized” (5). Some were born into socialism, others gravitated to it from other radical traditions, and still others shared Richard Wright’s perhaps simplistic aim of joining together “the poor, the downtrodden and oppressed people all over the world” (54). The manner in which Storch’s work illuminates the variety of inspirations Chicagoans found in Communism during these years is effective in her conception of her work as a community study, but misses the mark in evaluating the political underpinning of such a Communist culture. It asks rather than assumes, “who were Chicago’s Communists? How, when, and why did they implement Third Period policy? What did they actually do in the city’s neighborhoods and industries? How did they understand the party line? When and why did they reinterpret it?” (4) However, Red Chicago cannot resist understanding Stalinism as a force somehow alien to party membership, rather than as a nuanced ideological reality that they actively participated in constructing. Perhaps, then, the use of Storch’s text lies in its psychological analysis of party members, but it does not operate as a political history.

The volume of information Storch compiles in Red Chicago is considerable. The book usefully highlights key tendencies within the Communist Party during the Third Period, and delves into considerable detail regarding recruitment, party culture, relief initiatives, radical trade unionism (and its demise), youth organizing, women’s rights, and anti-racism. In some ways, Third Period organizing appeared to take a dramatic turn to the Left, adopting a quixotic rhetoric of revolution. A microcosm of such Stalinist ultra-Left tactics is found in the dual-unionism strategy epitomized by the Trade Union Unity League (TUUL), which vilified the “moral capitalism” of organized labor under the AFL-CIO as a hazard and hindrance to working-class organizing. Under the Popular Front, the hyperbolically sectarian TUUL became passé, quickly forgotten in a rhetorical and political shift away from revolution towards unapologetic reformism, as groups previously described as “fascist” became close allies in the power shift inaugurated by the unfolding of the Second World War.

Storch claims these contradictions and paradoxes are partially products of the intense politicization of the late 19th and early 20th centuries. Chicago was no exception, as its radical past acted as a peculiar foundation for its vein of Communism. The site of the Haymarket Riots and of the struggle against the resulting bogus prosecutions, not to mention the home of a massive eight-hour movement, Chicago was also the backdrop to the Pullman Strike, and a major center in the founding, first, of the Industrial Workers of the World and, later, of the American Communist Party. The rich history of struggle amongst anarchists, socialists, and communists for leadership of Chicago’s labor movement was clearly evident in the earliest days of the American Communist Party, when party leaders maintained contacts and friendships with “an array of activists struggling to find their own answers to the problems they saw inherent in the capitalist system” (9). Leftists of all varieties were in frequent dialogue and dispute with one another, polemicizing in parks to crowds of thousands: a political landscape almost unimaginable to modern readers, and antithetical to policies of zero collaboration.

Chicago epitomized a particular imagination of the proletariat. Brawny and bustling, built by 19th century industrial manufacturing and mass transportation, it was home to many militant workers, including thousands of highly politicized immigrants and black migrants, each of whom came to the party “with their own newspapers, cultural groups, institutions, and willingness to quarrel” (19). Of Chicago’s Communists, nearly half spoke foreign languages, and a quarter were African American; the party also included an abundant unemployed population, though this often conflicted with its organizing strategies, which were based in the labor union. It is too easy, however, to distill the Chicago party culture to a fundamental essence, a tendency Storch does not entirely escape. It was cosmopolitan and traditional; it had communities propelled towards preserving ethnic identity, and those promoting Americanization; it grappled with issues of sexism and racism in the State and within the party, with limited degrees of success. Perhaps Chicago was the muscle of the Communist Party, but it hardly resigned itself to that alone: it was home to such radical spaces as the Dill Pickle Club, Bughouse Square, and the John Reed Club, where famous intellectuals, writers, and artists such as Richard Wright and Nelson Algren debated and created works of artistic and political significance. And yet, Storch’s portrait of the city supposes that intellectuals were (and, frighteningly, perhaps forever are) outside, looking in on the proletariat, rather than existing as an integral part of working-class politics. Striving to dismantle preconceptions of the early Communist Party, Storch falls short on recognizing her own problematic reproductions of certain historical fictions.

Storch’s fascination with cultural contexts, then, sometimes comes at the expense of fully characterizing a sober evaluation of the pervasiveness of Stalinist politics, which is frequently positioned as some sort of Soviet boogeyman rather than the worldwide reality of Communist politics that it actually was. This is exemplified by her treatment of the problem Trotskyism posed within the Third Period. From Storch’s claim that Chicago’s Trotskyist sympathizers and non-conformists were “infrequently expelled, not forever severed and, sometimes, even readmitted,” one might suppose that political intolerance was only a Soviet phenomenon (95). Storch produces an unfortunate historical imagination here: While Trotskyists in the Soviet Union are condemned to exile, work camps, and extermination, their American counterparts are assumed to be benignly tolerated by party members. It is a dangerous assumption, one that proposes that American Communists were not conscious agents in the repression of political dissidence. Albeit generally more amiable than the USSR, the Chicago Communist circles were hardly a space for internal polemicizing.

There were real political commitments and allegiances based on cues taken from Moscow, so that plenty of American Communists quickly came to assume the role of Stalinist counterparts in the Soviet Union. Chicago Communists tirelessly organized, recruited, and routinely burned themselves out for the party. Take, for instance, the 2,088 demonstrations that the Chicago Communists organized or participated in during the first five years of the Depression. Beyond protesting, organizing labor, and working on reform initiatives, the Communists formed party schools, hosted community functions, and created relief networks. The repression and economic depression of the time produced a steadfast, even uncritical belief in capitalism’s imminent demise—a belief guided in equal parts by eagerness, theoretical immaturity, and a collective memory of the October Revolution. So while retention was a serious problem for recruiters, membership increased four hundred percent nationwide and five hundred percent within Chicago during the Third Period. This is expressive of a central contradiction of the Third Period: revolutionary fervor, on the one hand, and on the other a dilution of strength, with size taking precedence over sustained, ideological commitment (36). While the Popular Front attracted even greater numbers, including formerly unresponsive white-collar workers and Marxist intellectuals, its emphasis on collaborative efforts surrounding anti-fascism emerged only after fascism had already gained momentum in Europe and, even then, occurred at the expense of clear ideological stances. The embodiment of such a betrayal exists in the apology made by Communists internationally for the Hitler-Stalin Pact. As international relations became confused by the rise of the right, along with the Second World War and its aftermath, the aims and ambitions behind ultra-Left tactics appeared as a misguided dream.

If the history of the Left is one ultimately of failure, the Communists of Red Chicago prove to be no exception. And yet, we must not be disillusioned or delusional in our disappointment, but instead admit that it is only in their confusions and missteps that we can find potential. Storch’s text is a microcosmic example of why we must re-evaluate our relationship with the past. While, practically, it teaches both of methods and mechanisms successful in engaging interest about communism and of the systems, structures, and spaces that can be used as support for inquiry, it also represents a certain intellectual and political poverty, one that Storch seeks to overcome, but cannot entirely escape. Red Chicago poses a challenge that it does not fully deliver upon: to seriously consider how a Marxist understanding has (d)evolved since the Third Period through a reconfiguration of imaginations regarding the Left’s past and its participants. In the scores of narratives found in Red Chicago, no one is totally exempt from or irredeemably victim to the particularities of Stalinism and the Soviet Union; by projecting fictions of helplessness and radical subjectivity onto the past, we negate the potentiality history has to offer our present. At the same time, optimism for our political future exists only in accurately pronouncing the failings of the historic Left in terms of a regression of the possibility in actualizing Marxist intents. |P

The latest hits on the 1619 Project: Designed obsolescence?
Psychoanalysis and Marxism
The Australian Labor Party and the Left
A very strange suggestion: A response to Woody Holton
Understanding imperialism in the 21st century: The problematic legacy of Lenin
A few key points: A response to Woody Holton
The anti-war movement then and now
Deep underground in the Philippines: An interview with Nathan Quimpo
Chapters
The Platypus Affiliated Society
The Platypus Affiliated Society, established in December 2006, organizes reading groups, public fora, research and journalism focused on problems and tasks inherited from the “Old” (1920s-30s), “New” (1960s-70s) and post-political (1980s-90s) Left for the possibilities of emancipatory politics today.
Founding Documents