THE STORY ITSELF IS WELL KNOWN: Originally trained as a physician, Ernesto "Che" Guevara was an Argentine revolutionary who played a significant part in the Cuban Revolution. Later, Che tried to help incite revolution in the modern day Democratic Republic of the Congo and in Bolivia, where he was eventually killed in 1967. In the more than four decades since his death, Che has been transformed from one among many icons of the revolutionary 1960s into the most recognizable political icon of the period. Indeed, it would be difficult to name a more obvious-or more ambiguous-symbol of that era's supposedly revolutionary character than the ubiquitous photograph of Che taken by Alberto Korda, Guerrillero Heroico. This photo crystallizes a range of the period's dominant preoccupations-with revolution, heroism, masculinity, and martyrdom-all of which continue to haunt us still. As the actual political significance of Che's actions recedes into the past, and revolutionary Cuba, his chief living testament, is transformed into little more than an exotic tourist destination, we might expect that Che's revolutionary glamour would fade. And yet, it remains very much an ongoing concern today. From giant murals in Cuba to the ubiquitous T-shirts bearing his image, the Che mystique persists, and with it a legacy that, whether endorsed or condemned, grows increas­ingly opaque in the present. Both that image and that legacy have now been brought to the screen by one of Hollywood's leading directors, Steven Soderbergh. The resulting film raises the question of working through the history of the Left only to disavow this project as poten­tially paralyzing.

Che consists of two parts, which in some markets have been released as two separate films: The Argentine and Guerrilla. Taken together, it represents a significant con­tribution to the already substantial corpus of Che-derived media, not least because it is the first noteworthy encoun­ter between the icon and Hollywood. It is a complex film, an obvious labor of love on the part of one of American cinema's finest directors, with an impressive performance by its leading man, Benicio del Toro. In terms of its formal achievement and realization, Che is a very good film and ranks with Soderbergh's best work. But when the film's subject is Che, this might not be enough. 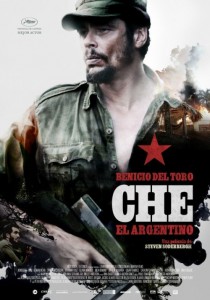 Although a biopic, Che makes no effort to cinemati­cally recreate Guevara's life story. Rather, it sticks to Che the Revolutionary, narrating the story of two guer­rilla campaigns: the successful insurgency against the Batista regime in Cuba (The Argentine), and the failed and ultimately fatal attempt to incite the peasants of Bolivia into revolution (Guerrilla). While some scenes are set in neither Cuba nor Bolivia, including a sequence that treats Che's trip to New York City and address to the United Nations, Che remains fundamentally a tale of two wars. In consequence, Che's complex career is synthesized into two relatively conventional war films. Eschewing the introspective approach taken by Brazilian director Walter Salles in Motorcycle Diaries (2004), this film has a differ­ent focus. As Soderbergh remarked, "I was interested in Che as a warrior, Che as a guy who had an ideology, who picked up a gun. [T]his [film] was the result."

In explaining his attraction to Che, Soderbergh does mention ideology; still, it is clear that Che's picking up of the gun is what genuinely captured the director's imagi­nation. Alternatively, we might say that this film suggests that ideology is something people with guns are more likely to have. At any rate, for Soderbergh, Che is a mili­tary man first and a political man second; hence the near exclusive focus on military campaigns. As others have pointed out, this decision allows Soderbergh to omit from the film any serious treatment of the most controversial aspects of Che's record, such as the notorious execu­tions at the La Cabana fortress or his stint as President of the National Bank of Cuba. No scene in this film shows Che executing political prisoners, bungling the national budget for the fiscal year, or speaking in glowing terms of Joseph Stalin. Apparently, these are not the aspects of Che's career that Soderbergh thinks worthy of further exploration.

It comes as no surprise that in the hands of the direc­tor of Ocean's 11 (2001), Out Of Sight (1998), and Traffic (2000), the leading impulse is to entertain. Battle scenes are tightly paced and genuinely suspenseful, even if we know how things will turn out. The acting of the en­semble cast is likewise superb. Catalina Sandino Moreno, who plays Che's wife Aleida March, and Demián Bichir, who plays Fidel Castro to surprisingly comic heights, are particularly outstanding. In the leading role, Benicio del Toro forges a moving, complex performance from the sparse raw material of Che's biography.

In one sense at least the film is right to give short shrift to Che's politics. After all, as even the most cursory glance at his writings proves, Che was no great theo­retician. In virtually all cases, and definitely in the case of Cuba and Bolivia, his approach was little more than Robin Hood-style banditry gussied up as Marxist revolu­tion: His modus operandi was to take to the hills and start kicking ass, but make periodic reference to the work­ing class while he was at it. By treating Che chiefly as a military adventurer, the film does convey something es­sential about Che's politics: its opportunism. Yet even this treatment, sympathetic in both form and content, cannot avoid bringing its hero into conflict with other, very differ­ent elements of the Left. 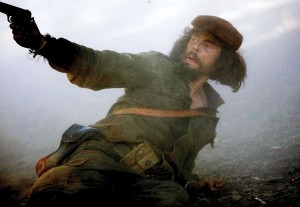 In The Argentine, after Castro meets with the leaders of Cuba's urban labor movement to conclude a vital cooperation pact, Che derides them as "clowns" and questions the value of dealing with them at all, since they are not fighting. Likewise, in Guerrilla, when Mario Monje, leader of the Bolivian Communist Party, tells Che that the party disagrees with his methods, Che's response is a burst of invective and the continuation of an increas­ingly quixotic guerrilla campaign. Che seems almost hopelessly naïve in these encounters, such as when early on he responds quizzically to another guerrilla's bitter remark about "Stalinists." While Soderbergh clearly feels it is important to intro­duce these scenes into the film, his handling of them is uncertain. Ultimately, the film, like Che, seeks dramatic resolution through armed struggle, and thus implicitly endorses Che's impatient preoccupation with "action." This is never clearer than when Che and his fighters prepare for the Battle of Santa Clara, which represents both the climax of The Argentine and the death knell of the Batista regime. In preparation for this risky engage­ment, Che makes an effort to unite various rebel groups under his leadership. This is one of the most interesting parts of the movie, because it raises the spectre, for the first time, of serious political divisions between the vari­ous factions fighting Batista. There are several causes of discord between the factions, from tactical questions to strategic differences, but in the end it is Che's charisma and seemingly unique martial abilities that resolve what are made to seem merely verbal disagreements. Che's personality cements the Popular Front supposedly nec­essary to overthrow Batista's detested lackey regime.

Watching Che, particularly The Argentine, it is difficult not to be reminded of David Lean's memorable Lawrence of Arabia (1962). Both films tell the story of a foreigner who throws in his lot with an insurrectionary movement only to become one of that movement's greatest leaders, both share the trope of the execution of a disobedient soldier as a sort of revolutionary baptism, and both are exceptionally entertaining Hollywood epics built around complex performances by great actors. But the achieve­ment of these films as works of art serves, perversely, to confirm the politically problematic character of the men they celebrate. Of course, there is no real comparison between Lawrence's support for the House of Saud in the service of British imperialism and Guevara's struggle against American imperialism in the Western hemi­sphere. Yet both films betray deep ambivalence towards politics, preferring instead to promote the myth that massive and systemic injustice can be rectified simply by recourse to personal courage and armed struggle. Though, unlike Lawrence of Arabia, Che does condescend to portray something of the real political content behind the events it displays, through its narrative structure it ultimately subverts and empties those scenes of content. It is because of this that, as an attempt to actually work through the past, Che must be judged a failure. |P