SUSAN BUCK-MORSS'S RECENT OFFERING, Hegel, Haiti, and Universal History, takes critical aim at two targets: what she identifies as Eurocentric models of universal history, on the one hand, and, on the other, the rejection of any notion of universality whatsoever in favor of the postmodernist "plurality of alternative models" (ix). What she proposes instead is "a universal history worthy of the name" (x), by which she means one that does not give the European Enlightenment and its direct heirs a monopoly on the historical project of freedom. It is refreshing to see the false choice of Eurocentrism vs. postmodernist pluralism identified as such, but if Buck-Morss opposes such a false choice, she fails to register and critique it as a contemporary historical symptom itself. She thus ends up with a theory that is universal in name, but which remains essentially postmodernist in content. 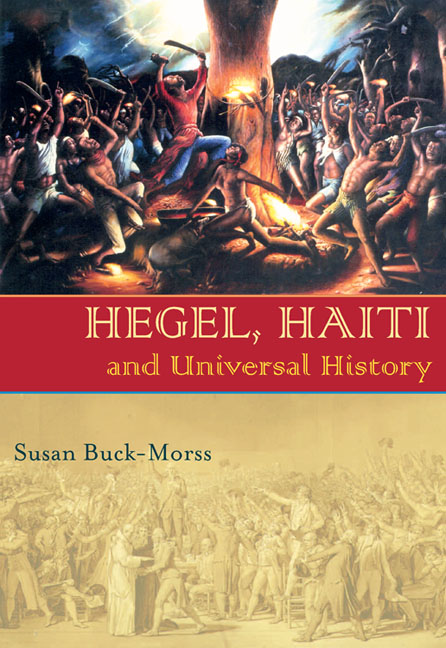 The short book reprints her essay "Hegel and Haiti," originally published in 2000 in Critical Inquiry, together with a new essay, "Universal History," in which Buck-Morss responds to the original essay's critics, par­ticularly those for whom "the very suggestion of resur­recting the project of universal history from the ashes of modern metaphysics appeared tantamount to collusion with Western imperialism"(ix). The book also contains substantial prefaces to both essays.

In "Hegel and Haiti," Buck-Morss's central histori­cal claim is that Hegel's discussion of freedom, gener­ally, and his formulation of the "master-slave dialectic," specifically, were directly informed by his awareness of the Haitian Revolution. This argument, Buck-Morss asserts, has scarcely been made, much less thoroughly investigated, by mainstream Hegel scholarship. "One wonders why the topic Hegel and Haiti has for so long been ignored. Not only have Hegel scholars failed to answer this question; they have failed, for the past two hundred years, even to ask it" (56).[1] Buck-Morss sup­ports her claim that Hegel was aware of the Haitian Revolution by pointing out that the revolution was going on at the same time as Hegel was formulating his phi­losophy of history, and that he was reading periodicals such as Minerva and The Morning Post at the time, both of which closely covered the events in Haiti. The conclusion to be drawn, she argues, is that Hegel, who at the time was engaged in thinking through the historical project of freedom, was influenced, if not compelled, by his reading of journalistic accounts of a contemporary, actual slave rebellion that Buck-Morss regards as a concrete unfold­ing of this dialectic. 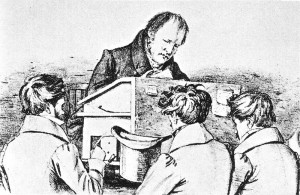 Hegel and his students

But if the Haitian Revolution inspired Hegel, his philosophy of freedom remains bound, for Buck-Morss, to a Eurocentric and racist worldview. In this way Hegel is representative of what Buck-Morss sees as the hypoc­risy of modern Europe in general, wherein the pursuit of freedom was carried out in theory but only partially and selectively in deed. Modern Europe, in other words, developed a theory of freedom that was simultaneously negated in practice.

The Haitian Revolution, on the other hand, repre­sents for Buck-Morss a break with this hypocrisy, and the first genuinely modern political struggle for freedom, by which she means that it first posed the problem of freedom in a truly universal, albeit not entirely unprob­lematic, manner. "The Haitian experience," she asserts, "was not a modern phenomenon too, but first" (138). She also attributes to the Haitian Revolution a degree of singularity: "The radical anti-slavery articulated in Saint-Domingue was politically unprecedented" (138). Most importantly for her argument, the Haitian Revolution constitutes an example of a "historical rupture," an event discontinuous with the trajectory of history (133).

It is in such ruptures that Buck-Morss sees the possibility of a universal humanity emerging. This is also where her affinities with postmodernism, a mode of thought she professes to contest, are clearly vis­ible. There is a shared hostility to dialectical theory, which would demand that the contradictions born of the European Enlightenment and the bourgeois revolution, including that of racism, be dealt with immanently. But for Buck-Morss such a treatment would, to use her language, be tantamount to collusion with European racism. Her hostility to dialectics is evident when, for ex­ample, she says, "any political movement that attempts to transform the death's-head (the skeletal remains of the victims of history) into an angel's face (history's redeemer) is far more likely to unleash a human hell" (144). Thus, faced with the glaring contradiction between Europe's philosophy of freedom and its brutal economic and political practices, Buck-Morss searches elsewhere for a practice that corresponds to the theory. Her ap­proach, then, is based on an understanding of theory and practice as autonomous, or at least semi-autonomous, phenomena. 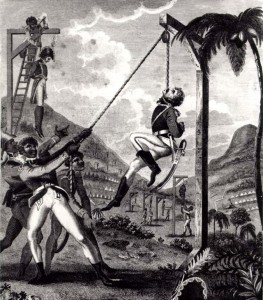 “Revenge Taken by the Black Army,” engraving in Marcus Rainsford’s An Historical Account of the Black Empire of Hayti (1805).

Rather than necessarily bound up with each other as part of a single historical practice, the pursuit of freedom in theory and its negation in practice remain for her distinct and incidental, if simultaneous, processes. This sundering of theory and practice, this failure to take account of their dialectical relationship, compels Buck-Morss to remain satisfied with merely condemning the brutality of Europe's political and economic practices, to bracket them, and thus to fail in rooting the struggle for (and denial of) freedom within them

The model of historical rupture also has a distinctly Third-Worldist thrust, which comes out clearly when Buck-Morss states, "The greater the power a civilization wields in the world, the less capable its thinkers may be to recognize the naiveté of their own beliefs" (119). According to this logic, Buck-Morss is herself in no posi­tion to adequately grasp the world and her beliefs about it, which ironically becomes the case precisely because she holds this view. Several pages later she contin­ues, "It is in the discontinuities of history that people whose culture has been strained to the breaking point give expression to a humanity that goes beyond cultural limits. And it is in our empathic identification with this raw, free, and vulnerable state, that we have a chance of understanding what they say" (133). Such romanticiza­tion, which represents the crux of Buck-Morss's thought in this book, is nothing new. It has dominated radical thought for the last 40 years, in both its New Leftist and postmodernist strains. Buck-Morss frames her call for "a universal history worthy of the name" as a challenge to such thought, when really it is only its repackaging. |P

[1]. It should be pointed out that Buck-Morss immediately goes on to say, "Surely a major reason for this omission is the Marxist appropriation of a social interpretation of Hegel's dialectic. Since the 1840s, with the early writings of Karl Marx the struggle between the master and slave has been abstracted from literal reference and read once again as a metaphor, this time for the class struggle" (56). This is one example of her contention that Marx and "(white) Marxism" are complicit in the whitewashing of history and the struggle against oppression, an ill-conceived charge that I will not directly address in this review.