LIKE MANY CRITICS OF GLOBALIZATION, David Graeber does not seem to understand what capitalism is. Otherwise he would not emphasize time and again that a market economy is something fundamentally different, as he does in his book, Debt: The First 5000 Years. Graeber’s distinction fits with a lot of left-wing currents, from old-fashioned anarchists in the tradition of Proudhon to young militants of Attac. All too many people assume that capitalism simply means financial speculation, intransparent bank dealings, monopolies, or interest as a way to garner income without work, all of which place a burden on the middle class. A market economy, on the other hand, is associated with “honest” labor and fair exchange. 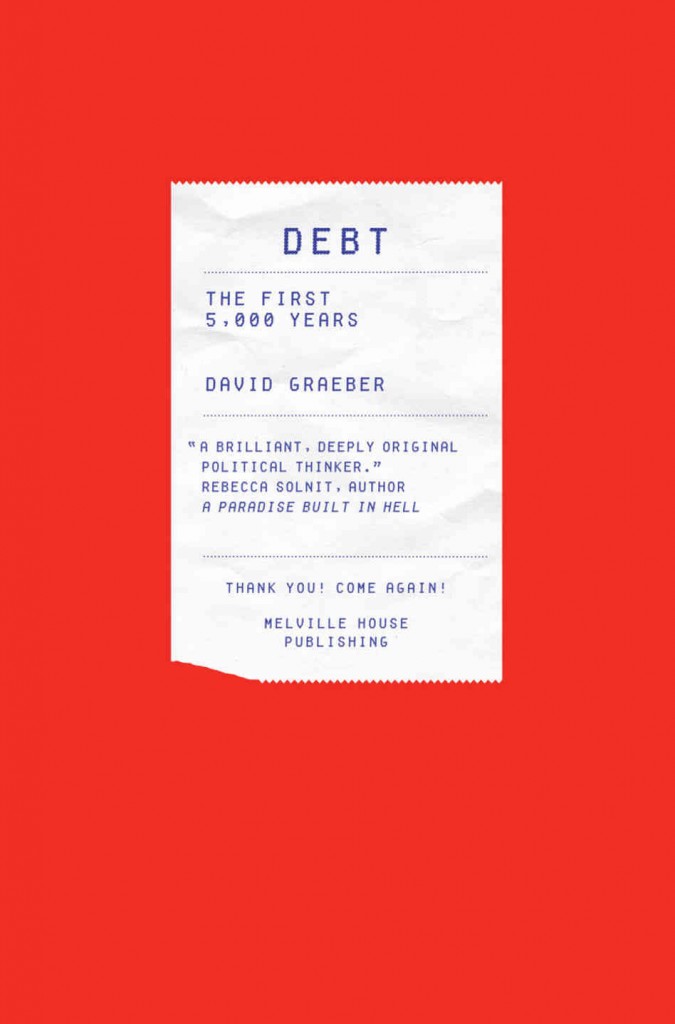 Sociologically, this has been the ideology of a petty-bourgeois middle class–of small artisans, merchants, peasants, self-employed doctors, attorneys, engineers, public officials, high-salaried workers, and skilled laborers–since Proudhon coined the famous phrase, “property is theft.” Of course, his fans often willingly overlook that Proudhon aimed at people who exploit others by lending money for interest, and that he blamed the Jews especially for doing so.

In Debt, which has drawn praise from bourgeois reviewers and parts of the Left, Graeber begins by stating that we do not know what debt really means (5). He distinguishes debt and credit: Debts are abstract and quantifiable, establish “simple, cold and impersonal” relationships between human beings, are connected with coined money, and based on violence, whereas credits imply personal, emotional relationships and moral foundations, as if they were some sort of mutual aid or charity (13, 21). In the beginning of human history, Graeber claims, people made gifts reciprocally or gave things away on simple and non-quantifiable credit. Throughout the book, Graeber describes long cycles of history in which societies based on credit alternate with those based on money and debt.

Graeber skips around between ages and continents as he sees fit. When he wants to prove that adscript peasants were indeed well off since they did not have to supply their produce to townspeople, he points to sparsely populated Europe. When he wants to make us believe that the Middle Ages were an absolutely peaceful era, he declares Europe, with its eternal feuds among its noblemen, as irrelevant and points to Asia (297). Of course, the ruling powers in the Islamic world as well as in India and China waged endless war against each other and against their subjects too.

However, what is worse is the book’s simplified theory. Graeber forces 5,000 years of human history into a dichotomous schema of “human economies” vs. “military-coinage-slavery-complexes” (229). Dark periods during which states ruled with the help of standing armies, which the rulers paid with coined money, take turns with peaceful periods of manageable market economies with limited government intervention. In the latter, goods and people were exchanged on mutual credit or through “social currencies” that were in turn based on trust and common values.

In his “human economies,” women were exchanged by men like cattle, yet Graeber does not see any oppression, domination, or exploitation at work. Rather, he calls it “regulation,” since by marrying the woman the man was taking on responsibility; he was not buying the woman herself but rather the right to her progeny, Graeber tries to reassure the reader (131). It is precisely this, however, that constitutes an essential element of patriarchal domination. Men subdued and owned women, controlled their bodies, and restricted their sexuality to make sure that it was him and no one else who was the father of her children. Instead of regarding this relationship critically, Graeber sugarcoats: that the man was not paying with money but with “social currencies,” like shells (or cattle), is evidence to him that no act of purchase has taken place. The non-monetary consideration was only meant symbolically and was supposed to express that each woman was so unique that her value could not be measured with money.

Graeber wants us to believe that such “regulations” were only corrupted through money, and debts that are expressed through money, because now debt had become measurable and the debtors were brought dishonor. According to Graeber, our sense of justice was reduced to the language of business, and our moral responsibilities to our fellow human beings reduced to debt. Morals were thus transformed into an “impersonal arithmetic” (14).

Graeber even relativizes such brutal forms of exploitation and domination as persisted in the Indian caste system. He says that in the Middle Ages, when the great empires in India fell apart the independent village came into existence. While its structure may have been strictly hierarchically organized, Graeber argues, it did not know any coin money. The status of the untouchables within the caste system in these villages was bearable, because “the exaction of local landlords was, again, on nothing like the same scale as that under earlier governments” (255).

Likewise, Graeber romanticizes the empire of China and its Confucian officials as guardians of a thriving market economy. In fact, however, peasants repeatedly revolted against their lot in this exploitative society. Graeber praises khalifs and sultans for suppressing debt bondage and not intervening in the economy, all of this backed up by the Qur’an (275–282, 303). Slaves mostly served as trappings in the Islamic world, Graeber asserts, thus suggesting they were not really mistreated or exploited (274).

Bankers and conquistadores destroyed this paradise of medieval market economies, and society was once again marked by money, interest, and debt instead of credit for charity’s sake in a human economy. Like Proudhonists and right-wing “folkish” demagogues since the days of the German emperor William I, Graeber wants us to believe that capitalism is a only matter of interest, of usury, a term that was coined in the Middle Ages in Europe against money-lending and the money-lenders, which were usually identified as Jews.

Graeber, like Proudhon before him, suggests that bad capitalism could be transformed into a good market economy if only interest and the state were abolished.

Just like other apologists of a market economy without capitalism, Graeber overlooks their inner correlation. In many societies, products are exchanged on the market. The market mechanism can be combined with slave economies or feudal economies that generate little surplus. During the high Middle Ages, the market economic sector was entrenched within and limited by a feudal agrarian economy. This sector was either fed by surpluses produced by artisans or peasants, or by textiles and metals that were produced through wage labor, while overseas trade connected large parts of the world. This market economy was linked to brutal European expansion measures already since the age of the crusades. Such a combination created a dynamic that led to the emergence of modern capitalism. A market economy always signifies production of exchange-value under competitive conditions for which use-value is only a means to an end. This leads to wage labor becoming a commodified and regulated way of exploiting alien labor as well as to the exploitation and destruction of the environment. A market economy is not static but dynamic, especially during periods of technical progress that regularly divide those involved into winners and losers. The ruin of many and the expansion of a few corporations are just as much triggered by the laws of the market as are the crises that have been haunting society since the early days of industrial capitalism. In pre-industrial and pre-capitalist societies, crises meant that there was lack of commodities on account of war, plague, drought or other natural disasters. In a predominantly industrial society structured by the laws of the market, crises cause hardship and poverty within a world of abundance.

Graeber flatly dissociates communism and anarchism without distinguishing between different currents. Instead he trivializes communism as a fundamental human behavior pattern, as a give-and-take among family and neighbors. Already in his 2009 book, Direct Action, he reduces anarchism to an “mutual exchange between inspirational visions,” to “a process of purification, inspiration, and experiment,” and “a kind of…creative play.”[1] Graeber distances himself from “classical” anarchism because of its militancy, its atheism, and its search for a coherent theory. Instead, he identifies arbitrariness with regards to content and “anarchist spirituality,” such as “feminist paganism,” as the trademarks of the current movement.[2]

He argues that the world was exploited by financial elites with the help of corrupt governments, and suggests that the debt crisis was merely a sly political instrument with which neoliberal technocrats were holding down social movements, particularly the labor movement. He no longer holds the appropriation of surplus value, which human labor power creates in the production process and which needs to be realized on the market, as essential. Rather, exploitation to Graeber means primarily the doings of the financial elite, who talk us into acquiring credits all the while driving us into a modern interest-slavery.[3]

If Graeber would take the trouble to read the business section of bourgeois newspapers, he would see that the actually existing capitalism was still all about material production: about cars, airplanes computers, cell phones, semiconductors, houses, textiles, medicine, steel, aluminum, raw materials, or foodstuffs. The instruments of the financial markets in the end always refer to profits that need to be earned with commodities or services.

His fondness for market economies may explain Graeber’s strange anthropology. Like all his bourgeois forerunners, he tries to root capitalism in an immutable human nature; therefore, neighborly communism, barter, and hierarchies are three constants in every human society, almost as if they were innate in us. At the beginning of Debt, Graeber rightly criticizes the assumption of Adam Smith, and other exponents of classical political economy, that humans are traders from the very start. However, in the end, even his system of thought is based on the fiction that trade is a natural human behavior, even in prehistoric times without money and debt. This serious contradiction demonstrates how deeply-rooted is the affirmation of a market economy, which in our times means nothing less than capitalism. Graeber naturalizes modes of behavior that are in fact products of economic, social, and political relations. Likewise, he denies that there could ever be a society structured around the communist principle advocated by Marx and Kropotkin that everybody could labor according to his abilities, and each could consume according to his needs (94–102, 385–6).

Instead of analyzing the present-day capitalist economy, with its trends and crises, Graeber deals with the contradictions and problems of our time as if they might be a recurrence of the same 5000-year-old story of debt and shame. He seems not to grasp what has really changed: the restructuring of value-creation chains on a global scale since the 1970s to exploit cheap labor in the Global South as well as crack down on welfare states and higher wages in the north, the impact of microelectronics on production and trade, and the significance of the financial sector, not as master and commander, but as part of a capitalist economy. This leads him to focus on encumbered students, who cannot pay back their credits and will struggle against banks due to a lack of well-paying jobs, as a new revolutionary subject. Debt panders to this clientele as Graeber declares debt, and the struggle against it, to be the cardinal point of human history. Suitable for this poor analysis is his rather frugal proposal at the end of the book: A cancellation of debts, as described in the Old Testament (390–1). On the whole, Graeber has very little to offer for a new radical left approach. |P

A comment on the origins and influence of Lenin’s Imperialism, The Highest Stage of Capitalism
Sexual Freedom in Capital
Engels’ contribution to the critique of political economy: An interview with Michael Roberts
What is the future of capitalism?
The intellectual power of Marxism: An interview with Shane Mage
Police brutality and the Left
Imperialism: How does it task us?
Returning to Marxism in the Age of Trump in 2020