You are here: The Platypus Affiliated Society/Platypus International Convention/

Platypus International Convention 2022: Marxism and the Ends of Liberalism 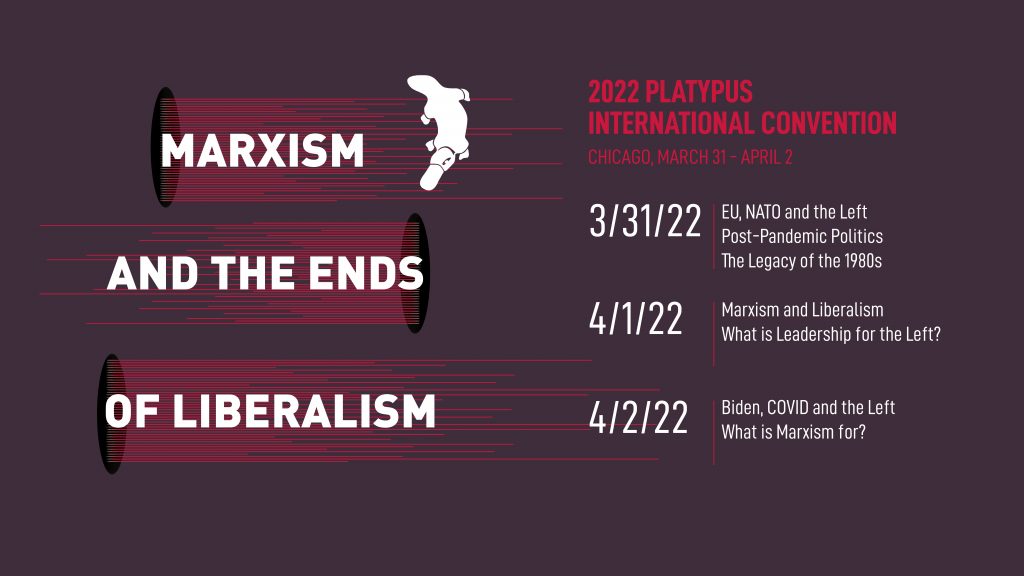 A PDF of the program can be downloaded here.

We invite the panelists to reflect upon the trajectories of their personal political development. How were you politicized? What was your experience being on the Left in the 1980s like? What specifically did the 1980s Left inherit from the 1960-1970s New Left and even earlier generations of the Left? What made it necessary (or unnecessary) to invoke and reinscribe Marxism in the 1980s? How did neoliberalism and the Cold War affect the tasks set forth for the Left then? From the standpoint of 2022, what did the 1980s Left amount to?

Historically, Marxists have emphasized the proletarian class and its political arm, the political party, as the revolutionary leadership in a democratic revolution. In the 20th century, radicals considered both alternatives (e.g. people of color, women) or some qualified vanguard e.g. black proletariat. Who should lead society and what does it mean to lead? Do the most oppressed and marginalized per se have revolutionary subjectivity? What is the relationship between Democracy and Revolutionary Leadership? What would it mean for leadership of society to be posed by the Left?

At its birth, the Millennial Left aspired to pose a political challenge to neoliberalism; in 2020, the Millennial Left wanted to fight the right to get a lesser evil in office and has apparently succeeded, collapsing back into the neoliberal antinomy of progressive statism and personal responsibility as a result. How could the COVID-crisis have presented an opportunity for the Left to break with the politics of the Democratic Party? What do the responses by the state and civil society to the pandemic reflect, not about neoliberalism, but about capitalism per se? How should the Left think about post-pandemic politics, even as the aim of building a mass movement and party remains ever more distant?

Was the Millennial Left Marxist? What was not Marxist about it? What is the relevance of Marxism today? Why is it necessary to recover or return to Marxism and what would it mean to go beyond it? What is the point of leadership by Marxist intellectuals? Is that necessary?

If you plan on attending, please register here and send in $20 via Paypal to cover expenses. Additionally, the fee for attending the Exchequer dinner on Friday night will be $35, which can be paid at the same time via Paypal.