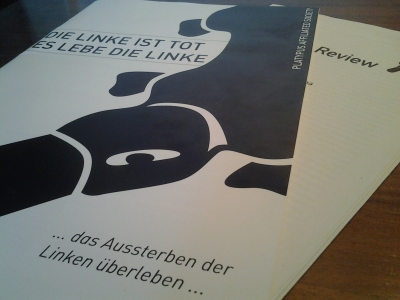 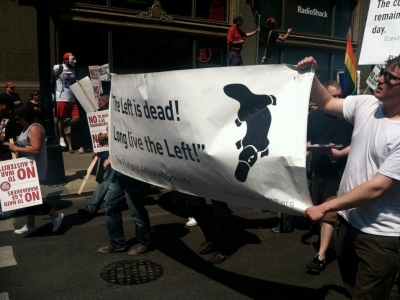 What is a Platypus? 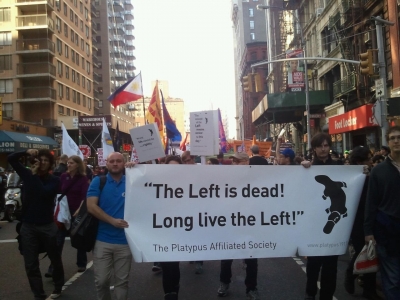 A Short History of the Left 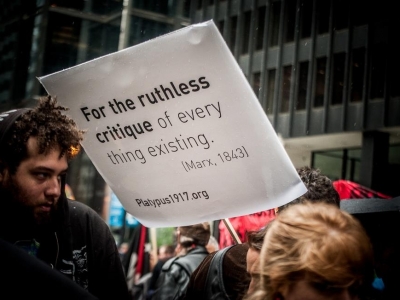 The Left is Dead! Long Live the Left!

"The Left is Dead! Long Live the Left!"

Welcome!
The Platypus Affiliated Society holds two concurrent streams of the primary reading group for Australian participants where we explore the possibilities for emancipatory politics today! Please join us as we cast a critical light onto the accumulated wreckage of the past. One stream meets in-person on Thursday evenings at the Kathleen Syme community center in Carlton, Victoria, and the other stream meets online on wednesday nights via Zoom.

II. Introduction to revolutionary Marxism - Semester 1 (February-June)
Through reading key texts from the high period of the history of Marxism in the 2nd International and its crisis in the early 20th century, the problem of consciousness of this history and its potential political implications in the present are addressed. Readings include Luxemburg, Lenin, Trotsky, the philosophical reflections on Marxism by Lukacs and Korsch, and their ramifications in the Frankfurt School Critical Theory of Walter Benjamin, Horkheimer, and Adorno. 2023 Syllabus.

Anarchism - Winter 2022 (June-July)
We'll be reading Proudhon, Bakunin, Kropotkin, Malatesta and Bookchin to tie in with our year-long theme on Anarchism. Syllabus

I. What is the Left? -- What is Marxism? - Semester 2 (August-December)
The historical roots of the Left and Marxism in the bourgeois revolution of the 17th-18th centuries and its 19th century crisis in capitalism are addressed through readings from Karl Marx and the background in radical bourgeois philosophy of Rousseau, Kant, and Hegel. 20th century attempts to recover Marx and Marxism's political consciousness by the Frankfurt School and in the 1960s-70s "New Left" frame the problem of consciousness of the Left in the mid-late 20th century leading to the present, through writings by Juliet Mitchell, Adolph Reed, Moishe Postone, and the Spartacist League/U.S., among others, and Theodor Adorno, Max Horkheimer, Georg Lukacs, Karl Korsch, and Leszek Kolakowski. 2022 Syllabus.

Our weekly Coffee Breaks are a great way to meet Platypus members and fellow travelers, and to get to know the Platypus project. It’s an opportunity to discuss issues raised in the latest issue of the Platypus Review, consider the state of the Left, and just hang out with people who have similar political interests.

All of our events are open to the public, new attendants encouraged.

Check back soon for more information about dates and location.

Public ForaHosting the conversation on the death of the Left

On Saturday, May 22nd, 2021, the Melbourne chapter of the Platypus Affiliated Society hosted an in-person panel discussion at the Clyde Hotel in Carlton, Australia on the question: "What is Capitalism, and why should we be against it?"

We take the question of internationalism seriously and we do so through hosting the conversation at different cities, such as in Greece, Germany, Canada, US and UK. Through our public fora we try to raise the same issues in numerous contexts and thus build a continuous conversation through multiple locations. The importance of hosting the conversation, as opposed to organizing debates or varying forms of activism, is due to platypus’s self conception as a pre-political project. The choice of a pre-political project is not merely a choice to abstain from politics, but rather, it is informed by what we recognize as a greater absence of politics, that is, the absence of radical democratic social transformation in our moment. We don’t seek to host debates but instead “curate conversations” in which the differences among various tendencies on the “Left” can be manifested and worked through.

The Platypus Review seeks to be a forum among a variety of tendencies and approaches on the Left—not out of a concern with inclusion for its own sake, but rather to provoke disagreement and to open shared goals as sites of contestation. The PR hopes to create and sustain a space for interrogating and clarifying positions and orientations currently represented on the Left, a space in which questions may be raised and discussions pursued that would not otherwise take place. Print copies will be made available at our regular events and at the New International Book Shop (NIBS) downstairs at Trades Hall in Carlton.

Articles from the Latest Issue of the Platypus Review

The past and future of black politics and the Left
On June 5, 2021, the Platypus Affiliated Society hosted this panel with panelists Pascal Robert (co-host of This is Revolution, and a contributor to Black Agenda Report), Ashanti Alson (anarchist, on the steering committee of the National Jericho Movement, formerly...
The communist ideal in Hegel and Marx: An interview with David MacGregor
On March 6, 2022, Platypus Affiliated Society member D. L. Jacobs interviewed David MacGregor, author of The Communist Ideal in Hegel and Marx (1984), Hegel, Marx, and the English State (1992), and Hegel and Marx after the Fall of Communism...
SDS and the legacy of the New Left today
STUDENTS FOR A DEMOCRATIC SOCIETY (SDS) was founded in 1960 as a transformation of the student wing of LID (League for Industrial Democracy). The social democratic inheritors of Walter Lipman’s Intercollegiate Socialist Society, LID had banned Communists from its organization...
What is Marxism for?
On April 2, 2022, the Platypus Affiliated Society hosted this panel at Northwestern University as a part of the 2022 Platypus International Convention. The panelists were Benjamin Studebaker (formerly of What’s Left?, PhD from the University of Cambridge, benjaminstudebaker.com), Donald...
Chapters
The Platypus Affiliated Society
The Platypus Affiliated Society, established in December 2006, organizes reading groups, public fora, research and journalism focused on problems and tasks inherited from the “Old” (1920s-30s), “New” (1960s-70s) and post-political (1980s-90s) Left for the possibilities of emancipatory politics today.
Founding Documents