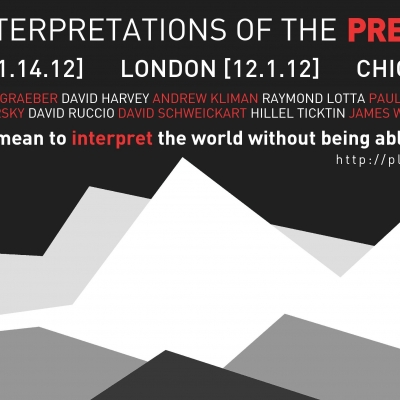 Radical Interpretations of the Present Crisis: A Panel Series in New York, London, and Chicago

An international panel series held in Winter of 2012.

The present moment is arguably one of unprecedented confusion on the Left. The emergence of many new theoretical perspectives on Marxism, anarchism, and the left generally seem rather than signs of a newfound vitality, the intellectual reflux of its final disintegration in history. As for the politics that still bothers to describe itself as leftist today, it seems no great merit that it is largely disconnected from the academic left’s disputations over everything from imperialism to ecology. Perhaps nowhere are these symptoms more pronounced than around the subject of the economy. As Marxist economics has witnessed of late a flurry of recent works, many quite involved in their depth and complexity, recent activism around austerity, joblessness, and non-transparency while quite creative in some respects seems hesitant to oppose with anything but nostalgia for the past the status quo mantra, “There is no Alternative.” At a time when the United States has entered the most prolonged slump since the Great Depression, the European project founders on the shoals of debt and nationalism. If the once triumphant neoliberal project of free markets for free people seems utterly exhausted, the “strange non-death of neo-liberalism,” as a recent book title has it, seems poised to carry on indefinitely. The need for a Marxist politics adequate to the crisis is as great as such a politics is lacking.

And 2011 now seems to be fading into the past. In Greece today as elsewhere in Europe existing Left parties remain largely passive in the face of the crisis, eschewing radical solutions (if they even imagine such solutions to exist). In the United States, #Occupy has vanished from the parks and streets, leaving only bitter grumbling where there once seemed to be creativity and open-ended potential. In Britain, the 2011 London Riots, rather than political protest, was trumpeted as the shafted generation’s response to the crisis, overshadowing the police brutality that actually occasioned it. Finally, in the Arab world where, we are told the 2011 revolution is still afoot, it seems inconceivable that the revolution, even as it bears within it the hopes of millions, could alter the economic fate of any but a handful. While joblessness haunts billions worldwide, politicization of the issue seems chiefly the prerogative of the right. Meanwhile, the poor worldwide face relentless price rises in fuel and essential foodstuffs. The prospects for world revolution seem remote at best, even as bankers and fund managers seem to lament democracy’s failure in confronting the crisis. In this sense, it seems plausible to argue that there is no crisis at all, but simply the latest stage in an ongoing social regression. What does it mean to say that we face a crisis, after all, when there is no real prospect that anything particularly is likely to change, at least not for the better?

In this opaque historical moment, Platypus wants to raise some basic questions: Do we live in a crisis of capitalism today and, if so, of what sort — political? economic? social? Why do seemingly sophisticated leftist understandings of the world appear unable to assist in the task of changing it? Conversely, can the world be thought intelligible without our capacity to self-consciously transform it through practice? Can leftist theoretical frameworks survive as an economics or social theory without politics? Is there capitalism after socialism?

What does it mean to interpret the world without being able to change it?