2018 HAS BEEN A YEAR OF COMMEMORATION and confusion for the French Left. The fiftieth anniversary of May ‘68 has been marked by museums exhibitions, book launches, and quaintly nostalgic demonstrations, leaving the anniversary proceedings as less a reckoning than a leftist-version of Woodstock II. Meanwhile, though the political Left has steadfastly sought to channel the spirit of the ‘68, they do so without the actual means or infrastructure to back up such a movement: 50 years ago, 8,000,000 took to the streets; today, barely 120,000 participants could be mustered in the Left’s April 19th action against the government.[1] Further adding to this confusion has been the meteoric rise of the Gilet Jaunes. (Yellow Vests) movement. Ostensibly formed in reaction to a proposed gasoline and diesel tax, the movement has since grown into a series of big-tent demonstrations which in just a few weeks has managed to become the most powerful opposition force to Macron’s reforms, turning out demonstrators in a way that the unions and actual opposition parties have steadfastly failed to do. The barricades, marches, and police conflicts utilized by the protestors naturally bring to mind the ’68 protests, but aside from tactics, the movement harkens back more to 1789 than 1968. More than a few parallels can be found between the aloof Louis XVI and Macron’s “Jupiterian presidency,”[2] and several commentators have compared the Gilet Jaunes to the bread revolts which spurred on the French revolution.[3] Participants in the protest have portrayed the conflict in similar terms, with one former Macron supporter-cum-opponent remarking that “Macron is our Louis XVI, and we know what happened to him.”[4]

Against this background, the release of Pierre Schoeller’s French revolution drama Un people et son roi feels particularly timely. Schoeller’s viewpoint is apparent from the very title, which has been rather unfortunately mistranslated into English as “One people, one king,” confusing the immediate purpose of Schoeller’s work: Un peuple et son roi is not the story of a people and a king, but a people and their king, and the film’s penultimate sequence will leave no question to the nature of this relationship. To this end, the story unfolds primarily from the viewpoint of the itinerant Basile (Gaspard Ulliel) and the family who takes him in, as they are all drawn deeper into the revolution. Interspersed with these scenes of “the people” are those of their king (a suitably haughty and frigid Laurent Lafitte) and the members of National Assembly. Particularly compelling in these scenes is Denis Levant’s resplendent portrayal of Marat, who strides about the assembly with the swagger of a pirate, an impression which is hard to shake, considering that he spends most of his scenes wearing a bandana and a cheetah skin coat while brandishing a pistol. 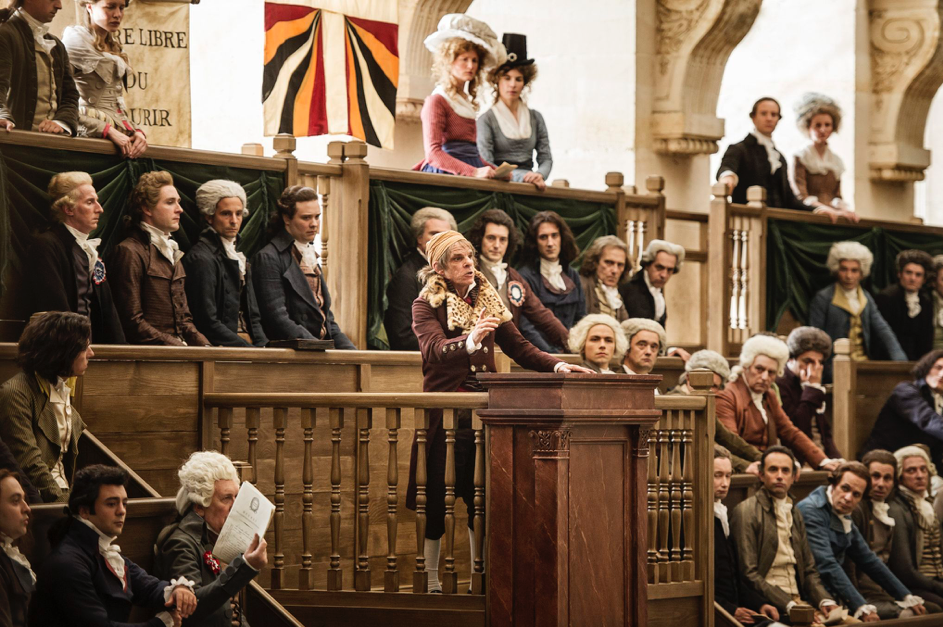 Far less compelling is Louis Garrel’s pensive, intellectual Robespierre (Louis Garrel), though this is no fault of the actor. Schoeller never develops Robespierre beyond the level of a virtuous statesman, and as such, we learn nothing of him as a character: neither of what he would ultimately be capable of, nor of what would bring him there, nor what has brought him to the side of the sans-culottes in the first place. To an extent, this understandable: this is not a biography of Robespierre. But it is also emblematic of the problems of the film. Un peuple et son roi is, above all, a strident defense of the revolution and its aims. Only in the immediate aftermath of Louis’ execution does the film break from this triumphant tone, as the screen slowly fills with blood that darkens the screen almost to black – but the deep dread conjured up is almost immediately dispersed as the camera pans out upon the crowd celebrating their new found freedoms. This scene, just as much as his depiction of Robespierre, reveals the chief flaw of Schoeller’s film: it simply refuses to consider the historical progression from revolution to terror to reaction that will eventually overtake its characters (and the revolution itself), sadly preventing the film from moving beyond a surface-level treatment that more often than not feels like a fairy tale, with a proper fairy-tale ending.

And it is for this particular quality that Schoeller’s film is so timely, not only for the general atmosphere of unrest in which it has been released, but also for wave of nostalgia and ahistoricity which has accompanied these manifestations. The series of left-wing protests against Macron earlier this year felt like nothing so much as longing for past glory, as fleeting as it may have been. A recent Charlie Hebdo column on a protest against Macron’s cuts to the pension system noted that many of those in attendance in 2018 were the same as those who had manned the barricades in 1968: “Where are the young? They must wake up, because we have not yet found the answer.”[5] One could equally ask, “where is the Left?” To which the only reasonable answer can be: the past. “Thought that stagnates, rots”[6] proclaimed one still relevant piece of ‘68 graffiti; yet such stagnation is just as evident among the French Left as their American counterparts. That the French have sought a return to ‘68-style activism is particularly ironic: say what you like about the soixante-huitards, but it is undeniable that they believed in the possibility of a new future. This future may not have been achievable, and even regressive, but the very belief that a new future could exist has been lost along the way. Just as the slew of anti-Trump activism in the U.S. has sought to emulate 60s, 80s, and Iraq War-era activity, the tactics of French social movements (marches, barricades, graffiti) are straight out of the ‘68 playbook. The continued failure of these tactics has, paradoxically, only served to reinforce them, as the future appears to offer less and less hope: the left social-democrat Jean-Luc Mélenchon and his France Insoumise (FI) movement are under investigation for campaign-finance violations; the Parti Communiste Français is caught up in internal turmoil, hemorrhaging voters to Le Pen, and feuding with Mélenchon’s movement;[7] and the Parti Socialiste is in financial and electoral ruin after coming in fifth in the previous year’s election, and losing a number of significant members to Macron’s La Republique En Marche. Even Daniel Cohn-Bendit, the famous face and spokesman of the soixante-huitards, has (rather unsurprisingly), become a Macronite.[8] 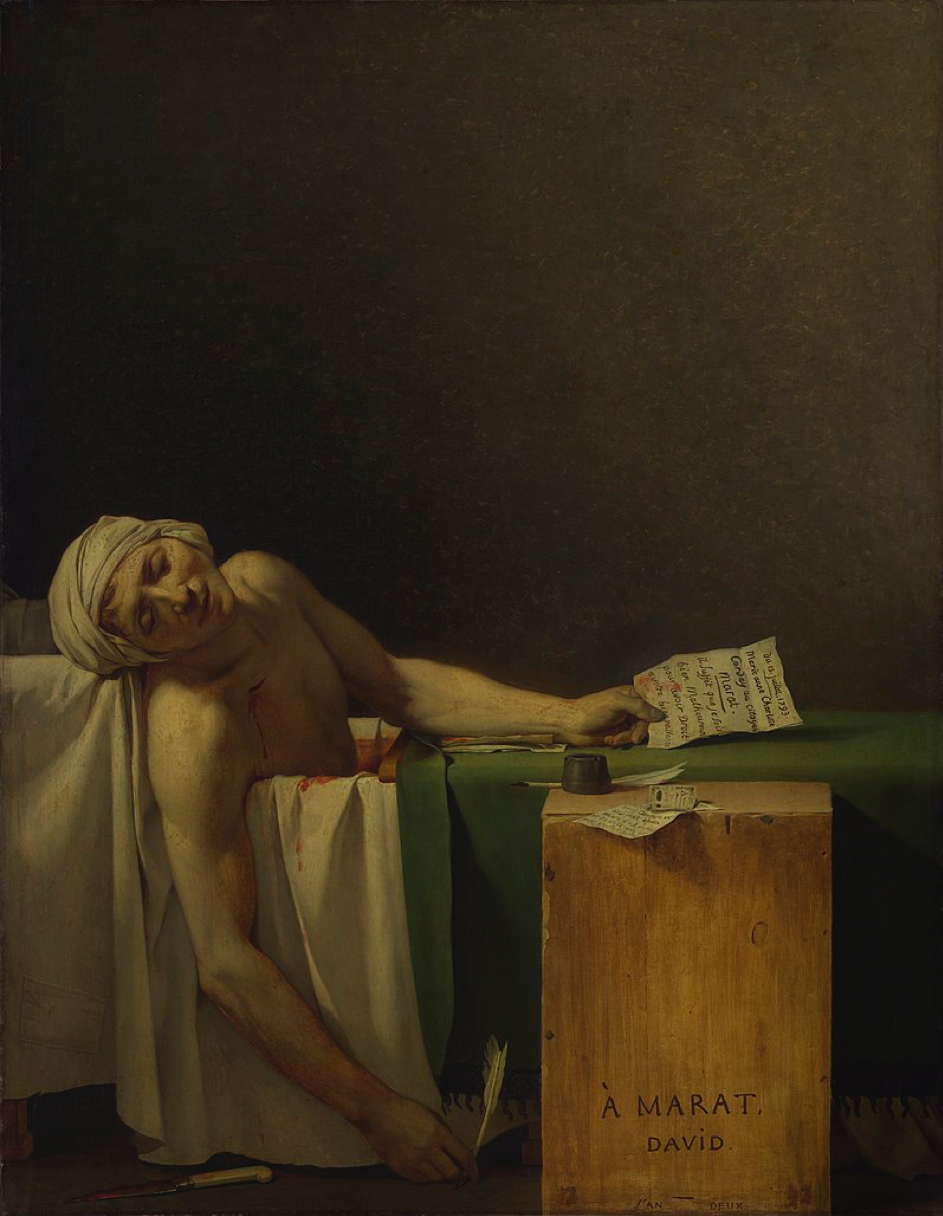 Jacques-Louis David The Death of Marat (1793). Jean-Paul Marat was elected to the National Convention in 1792 and was an important supporter of the Montagnards, a radical group opposed to the Girondins. Charlotte Corday, a Girondin sympathizer and daughter of a minor aristocrat, murdered Marat in his bathtub on July 13th, 1793.

The sudden appearance on the scene of the Gilet Jaunes has not eased this confusion or despair. While Mélenchon’s FI and Marine Le Pen’s far-right Rassemblement National have attempted to bring the demonstrators into their camps (and the government has steadfastly insisted they are already in Le Pen’s camp),[9] the movement has steadfastly remained independent of the parties, shows no signs of tying itself down to either of the polarizing leaders. Likewise, it has refrained from taking a clear ideological position, though its decentralization would make this difficult in any case, which would no doubt divide it. A Guardian interview with several of the protestors attests to this diversity of views, yet common among all is a frustration with the options offered to them; even those who admit to voting for Le Pen in the second round seem to have done so primarily out of resignation with the current state of politics.[10] The horizontalism and non-ideological nature of the movement raises questions as to how far it can ultimately go, and how long it can maintain this unity; but it also points to the fundamental failure of the Left to serve as unifying force for those affected by Macron’s reforms, by the very fact that that the most significant mass movement in over 30 years has arisen entirely outside of their influence.

Yet the Gilet Jaunes are no more the inheritors of ’68 than the current Left. Michel Clouscard significantly noted that much of what was demanded by and epitomized the soixante-huitards – a liberation of and the right to pursue one’s desires, the elevation of youth culture, liquidation of the reactionary “Old Left” – was fully compatible with capitalism, despite the students’ revolutionary posturing.[11] The truth of this is evidenced not only by Cohn-Bendit’s defection, but by the developments which followed ’68: the collapse of the traditional Left, the penetration of American consumer culture and attitudes, generational warfare over issues like pension reform and seniority rules, and the rise of gestural politics in place of actual effective political action. To expect that a similar rallying of forces could be organized today ignores the fact that while ’68 may have ushered in these changes, such a unified movement was only possible because they had not yet occurred. And it equally ignores that fact the true inheritor of ‘68s spirit is not the organized Left, but Emmanuel Macron.[12]

With this state of affairs, the argument could be made that the Left faces enough failures in everyday life, so why not allow a bit of escapism? But Schoeller’s choice to whitewash the excesses and suppression of the revolution simply by cutting off the film before they occur essentially nullifies any edifying effect the film might have had. Such escapism is not the exception to the rule, but the fact of daily existence for the Left, who seem content to wallow in nostalgia, while the Gilet Jaunes risk directly repeating the failures of ‘68, most clearly in their lack of organization or ideological coherence. And the old slogan “Run, comrade, the old world’s behind you!” appears to have been all but forgotten. Schoeller’s film not only falls into, but embraces this same nostalgic trap: it is a film in the spirit of 1968, about 1789, yet no attempt is made to consider the historical progression of these events. And while it is a frequently beautiful work that could certainly serve to provide a contrary view of the Great Revolution, its potential as a means of understanding is minimal. Perhaps it is this aspect, more than any other, which makes it so timely. | P