Attention to theory: Letter to the editor of Under the Banner of Marxism

On the occasion of the launch of a new theoretical journal in 1922, Under the Banner of Marxism (Pod Znamenem Marksizma), Lenin singled out the open letter that Trotsky had written to the editors in the first issue, while expressing the hope that the venture would take the shape of a “society of materialist friends of Hegelian dialectics.” Trotsky himself underscored the importance of the letter in The Stalin School of Falsification (1937), which, in pointing to the difference between the changed conditions of education of the younger members of the party from that of their older comrades, outlined the necessity of a new theoretical approach in order to safeguard the theoretical and political experience accumulated within the party. Despite the importance attributed to the letter by Lenin and Trotsky, Leszek Kolakowski, in his Main Currents of Marxism, considered the letter unexceptional.

As the first in an experimental new series of original translations, the Platypus Review is delighted to be publishing the first English translation of this important letter by Trotsky. 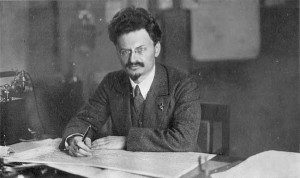 The idea of publishing a magazine that would introduce advanced proletarian youth into the circle of materialist ideology seems to me highly valuable and fruitful.

The older generation of worker-communists that is now playing a leading role in the party and the country, awoke to conscious political life 10, 15, 20, or more years ago. That generation’s thought began its critical work with the policeman, the timekeeper, and the foreman, then rose to tsarism and capitalism, and then, most often in prison and exile, proceeded onto questions of the philosophy of history and scientific understanding of the world. Therefore, before the revolutionary proletarian reached the critical questions of the materialist explanation of historical development, it managed to accumulate a certain amount of ever-widening generalizations, from the particular to the general, based on its own life's combat experience. The current young worker wakes up in the atmosphere of the soviet state, which itself is a living critique of the old world. Those general conclusions, that the older generation of workers acquired in battle and were fixed in consciousness by strong nails of personal experience, are now received by the younger generation of workers in finished form, directly from the state in which they live and from the party that governs that state. This means, of course, a giant step forward in terms of creating conditions for further political and theoretical education of the workers. But at the same time that this incomparably higher historical level is achieved by the work of older generations, new problems and challenges appear for young generations.

The soviet state is a living negation of the old world, its social order, personal relationships, views, and beliefs. But, at the same time, the soviet state itself is still full of contradictions, holes, inconsistencies, vague fermentation—in short, the phenomena in which the legacy of the past intertwines with the germs of the future. In such a deeply fractured, critical, and unstable era as ours, education of the proletarian vanguard requires serious and reliable theoretical foundations. It is necessary to arm a young worker’s thought and will with the method of the materialist worldview so that the greatest events, the powerful tides, rapidly changing tasks, and methods of the party and state do not disorganize his consciousness and do not break down his will before the threshold of his independent responsible work.

Arm the will and not only the thought, we say, because, in the era of great world upheavals, now more then ever before our will cannot break, but must harden only if it rests against the scientific understanding of the conditions and causes of historical development

On the other hand, it is precisely in such a critical era as ours, especially if it drags on—i.e., if the pace of revolutionary events in the West proves slower than hoped for—that attempts of various idealist and semi-idealist philosophical schools and sects will likely possess the consciousness of young workers. Captured unaware by the events—without prior extensive experience of practical class struggle—the thought of young workers could be defenseless against various doctrines of idealism, which are essentially translations of religious dogma into the language of pseudo-philosophy. All of these schools, despite the diversity of their idealist, Kantian, empirio-critical, and other designations, in the end agree that consciousness, thought, knowledge prefaces matter, and not vice versa.

The task of materialist education of worker youth is to reveal the fundamental laws of historical development. And the most important and primary of these foundations is the law which states that human consciousness represents not a free and independent psychological process, but a function of material economic foundation, i.e., is determined by it and serves it.

The dependence of consciousness on class interests and relations, and the latter on economic organization, is manifested most brightly, openly, but crudely in the revolutionary era. On its irreplaceable experience, we must help young workers fasten in their minds the foundations of the Marxist method. But this is not enough. Human society itself has both its historical roots and its current economy in the natural-historical world. One must see in the man of today a link in the entire development, which begins with the emergence of the first organic cell from the laboratory of nature, where the physical and chemical properties of matter act. One who has learned to look back with such clarity on the past of the entire world, including the human society, animal and vegetable kingdom, the solar system and the surrounding infinity, will not search for keys to understanding the secrets of the universe in dilapidated "sacred" books, these philosophical fairy tales of primitive childishness. And one who does not recognize the existence of heavenly mystical powers, capable of arbitrary invasion into the personal or social life and its direction in one way or another, one who does not believe that the misery and suffering will find some higher reward in other worlds, will stand firmer and stronger on the ground, and will be more confident and courageous in looking to the material conditions of the society for foundations of his creative work. Materialist ideology not only opens wide a window to the entire universe, but it also strengthens the will. It alone makes modern man human. It is true that he still depends on grave material conditions, but he already knows how to overcome them and consciously participates in building a new society, based simultaneously on the highest technology and the highest solidarity.

Giving the proletarian youth a materialist education—this is the greatest challenge. To your magazine, which wants to participate in this educational work, I heartily wish success.

Translated with the assistance of Yevgeniy Garmize and Alex Gonopolskiy