Book Review: Karin Bauer, ed., Everybody Talks About the Weather—We Don’t: The Writings of Ulrike Meinhof.

DON DELILLO BEGINS a short story from 2002 with a woman in a New York museum staring at a painting of Ulrike Meinhof after her suicide. He writes, “She thought of Meinhof, she saw Meinhof as first name only, Ulrike.”[1] Who is this “Ulrike” that the Left has known? They know that she was a founding member of the leftwing terrorist group Red Army Faction (RAF), dubbed by the media the Baader-Meinhof Gang. They know that Meinhof’s insistence on direct action against governments complicit in the Vietnam War led to a series of thefts, bank robberies, and bombings until her arrest in 1972 and death in 1976. They know her face from the portrait on her wanted poster, where her eyes turn down and away, from the stylized photos taken by Astrid Proll in the underground, or from Gerhard Richter’s blurred portrait in the Museum of Modern Art, where DeLillo’s character meets it. For the woman in the museum, as for many, Meinhof is a leftwing Madonna, a First World Che, to be filled with the sentiments of viewers who feel an intimacy without knowing much about her. 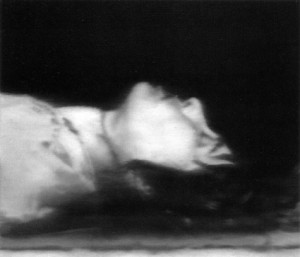 German studies scholar Karin Bauer’s edited volume addresses this gap, reminding us that Meinhof was a journalist before she became the face of armed struggle. Throughout the 1960s, most Germans would have known Ulrike from the headshot that ran above her monthly columns in the influential leftist magazine Konkret. There she held a pen and stared at the viewer with the critic’s look of patient exasperation. In her brief foreword to Bauer’s volume, Elfriede Jelinek calls it a tragedy that Meinhof’s writing ended in the “pitiless barked commands” of the RAF’s pseudo-military communiqués. Her columns had represented something quite different. They were the longest running and arguably most successful attempt made by the New Left to use the medium of print to oppose mainstream opinion in a public sphere increasingly dominated by images. As the vanguard of the student movement turned to pudding bombs, “flash mobs,” and eggings to get the media’s attention, Meinhof was a stalwart participant in the media. In 1967, she criticized a group of students arrested for planning the assassination of visiting U.S. Vice President Hubert H. Humphrey. “Instead of steering the excited attention they garnered toward Vietnam,” she wrote, “they talked about themselves” (229). The call for self-effacement through service in Meinhof’s writings, which echoes her Lutheran upbringing, contrasts with the way discussion over the last 40 years has fixated on her personality rather than the causes for which she fought. Bauer’s collection of 24 of Meinhof’s columns redirects attention from her status as the mute icon of a generation and a nation toward the issues that formed the substance of her politics. In doing so, Bauer restores intellectual complexity to a figure often reduced to raw emotion.

Bauer’s emphasis on complexity is both a virtue and a shortcoming of the book. Meinhof’s writings are artifacts of her moment. Readers without knowledge of West Germany in the 1960s may get lost in the details and the often cumbersome sentences. It is unclear, for instance, how Meinhof’s description of a Cold War summit in 1960, her critique of the West German Constitution from 1962, or her writing on the new visa regulations for West Germans entering East Germany in 1968, holds any relevance today. Meinhof’s later RAF writings, frequently translated and printed by small radical presses since the 1970s, were largely severed from historical particularity, ensuring a readership among activists keen to apply her free-floating insights to their own place and time. By contrast, her 1960s columns are so grounded in the details of contemporary West Germany that they risk becoming historical curiosities limited to scholarly interest.

Aware of this danger, Bauer provides an 86-page introduction that seeks to establish the social and political context of Meinhof’s columns for a general audience. She sketches the history of the RAF in the 1970s and the wedge that split the Old Left of the Social Democratic Party and the trade unions from the New Left of socialist students and intellectuals in the 1960s. Meinhof, who was born in 1934, belonged to a generation just prior to the “’68ers” and participated actively in the debates at the end of the 1950s. Meinhof vocally opposed the Christian Democratic government’s desire to rearm the military, as well as their suppression of domestic dissent through the outlawing of the Communist Party in 1956. Her early writings were sympathetic to the Soviet credo of “peaceful coexistence,” up to and including her 1960 assertion that “the Soviet Union is the country least affected or irritated by internal difficulties or disagreements with its allies” (106). Written four years after Russian tanks rolled into Budapest, such statements strained her credibility as an independent critic then, as they do now.

Bauer points out that the grounds for Meinhof’s good will toward the Soviets had a material component. Konkret, which Meinhof edited and her husband Klaus Rainer Röhl published, was funded by the East German government until 1964. It was Meinhof and Röhl’s daughter, Bettina Röhl, who generated great publicity by revealing the East German connection in 2006. Röhl expands on these revelations in the afterword that was her condition for granting the rights to republish her mother’s early work. With clear malice, and not a little cathartic glee, Röhl exploits the East German link as grounds to reduce everything written in the magazine to expressions of “infiltration” from the East. But Röhl overplays the socialist state’s influence. After all, circulation of Konkret had grown twenty-fold, to a peak of 200,000 copies in 1967, well after the termination of East German funding. That the nature of the magazine had changed considerably by that time is obfuscated by the book’s non-chronological arrangement. As Bauer mentions, soft pornography became the magazine’s stock-in-trade, doubtlessly accounting for much of this increase in sales. More telling, though, is what led to the termination of GDR funding in the first place. The East Germans, following the conservative Soviet line, had become frustrated with Konkret’s glowing reports of China and the Cuban Revolution. Worried about maintaining supremacy in the world socialist camp, the East Germans cut off an organ that celebrated the possibility that leadership might emerge from the Third World rather than Moscow.

The title of the edited volume, Everybody Talks About the Weather—We Don’t, taken from a 1969 column, points to some of the strongest elements of Meinhof’s writing after the 1964 split. The title references an ad created by the West German railroad company in 1967 to boast of their weatherproof trains. Socialist students reused the slogan in a 1968 poster alongside the profiles of Marx, Engels, and Lenin. The poster was a provocation to the anticommunist mainstream and also asserted the blustery academic seriousness of the student New Left, who were presumably too busy talking about the revolution to talk about anything so trivial as the weather.

Meinhof flipped the slogan’s meaning when she used it as the title of a 1969 column about the potential deportation of her personal friend Bahman Nirumand, an Iranian intellectual who had been crucial in mobilizing West German students against the Shah’s regime. She argued that it should not be taboo to use the effect that Nirumand’s expulsion had on his German wife and daughter as the grounds for protest. To pay attention to the family was not, for Meinhof, “humanitarian,” i.e., soft liberal and apolitical, but was a defensible concern of socialist politics. Meinhof argued that the failure to address the position of Nirumand’s wife reflected the New Left’s larger blind spot about ongoing female subjugation in socialist circles. Though it is a commonplace to think of feminism as a legacy of the New Left, it first emerged as an organized force in West Germany as a critique of male domination within the New Left. In this column and others, Meinhof shows the effect of her collaboration with the feminist Action Council for the Liberation of Women, a group that formed in West Berlin in 1968 and had spread across the country by 1969. What Meinhof’s title meant was that, true to the slogan, socialist students did not talk about “the weather”— meaning the everyday, the banal, the habitual, and the ingrained. But they should. Bauer’s inclusion of this article as the centerpiece of the collection captures Meinhof’s pioneering efforts in turning attention to the personal in a way that foregrounded gender as an organizing category of ongoing inequality, even within the student movement. Indeed, it is Meinhof’s more personal writings that retain the most force at 40 years’ remove. We see the empathy that moved her in pieces like the 1968 column that recounts the abusive upbringing of a child murderer, including the moment when he was made to despise his homosexuality—what she calls “his best quality.” Meinhof’s writings remind us that politics, shaped by events that demand analysis, are nonetheless underwritten by emotion and psychology. Later RAF tracts made blank fury the sole register of politics. Following the brutal chain of events through Meinhof’s columns and Bauer’s introduction, from the early years of the Vietnam War, now historically distant, to the proximate blows of police truncheons in the late 1960s, we can understand the anger but also see its limits.

The fascination with 1970s armed militancy in recent years has raised the question, “Why Meinhof, now?” The answer surely lies in frustration at the apparent futility of conventional activism against the U.S.-led War on Terror. Yet Bauer’s collection poses a more important question: “Which Meinhof now?” This volume gives English readers the Meinhof that was eclipsed when she went underground. Meinhof’s 1960s insights are less readily transferable to the present, or to the silver screen for that matter, than are the 1970s RAF communiqués. Nonetheless, these earlier insights suggest an alternative mode of political engagement to that of the vigilante martyr we may think we know. But to what effect? From the standpoint of an academic, it is soothing to think that writing might be the signature act of political engagement in troubling times. One wonders if the image of Meinhof as a columnist does not serve its own compensatory function, allowing a sense of identification not with the guerrilla in Ray-Bans, but the stewing deskbound critic. Is Meinhof at her typewriter a readier icon for a 21st century left, which does most of its politics at the keyboard and on the screen? Isn’t there a virtue in the 1970s Meinhof’s reminder that politics may also entail the deployment and even endangerment of our own bodies? After Bauer’s volume, people will continue to find the Ulrike they need. Its value lies in giving voice to the corpse Richter depicts in his famous blurred portraits—a voice reminding us that Ulrike’s violent revolt happened only after a long and maddening decade of thinking, convincing, and arguing in an inhospitable society. |P