STUDY THE STALLS OF A SEMINARY BATHROOM and chances are you will find the following scrawled out in ballpoint: “Nietzsche: God is Dead. God: Nietzsche is dead.” The quip relies on a misreading—God, for Nietzsche, did not die like your grandmother or pet turtle might die. God died like a language might die. In a secular world, belief becomes unbelievable. But the bathroom graffiti retains a bit of truth. Nietzsche, writing in 1882, recognized the collapse of religion. Today, the situation has changed: God is undead. 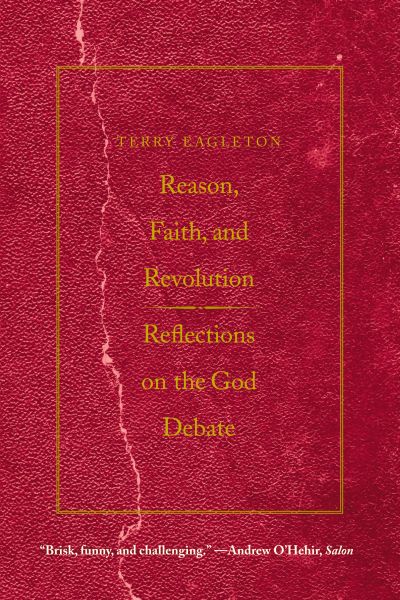 Across the globe, a holy revanchism rages against secularized modernity. Gynecologists shot in Wichita, “godless” protesters kidnapped in Tehran, Muslims mowed down in Hebron or impaled in Gujarat, discotheques bombed in Bali. Beneath the periodic violence, the cells of belief metastasize: madrassas, mandirs, megachurches, storefront churches, Mormon temples. Although this desecularization first manifested itself in the Iranian Revolution of 1979, it took the 9/11 attacks to prompt a significant literature of disbelief: the so-called “New Atheism.” Most prominent have been two wide-ranging polemics by Richard Dawkins and Christopher Hitchens: The God Delusion and God is Not Great: How Religion Poisons Everything. As their titles suggest, these are not subtle volumes. Dawkins and Hitchens wage unholy war against religion, detailing the crimes of the faithful and bashing traditional arguments for the existence of God.

British Marxist literary critic Terry Eagleton makes an unlikely defender of the faith. Yet the volume under review, first delivered as the Terry Lectures at Yale, mounts a sustained attack on the New Atheism. Eagleton makes two primary arguments, one broadly theological, the other political, against Dawkins and Hitchens, here quasi-wittily coalesced into “Ditchkins.”

First, Eagleton argues that Ditchkins botches the essence of religion, and ends up attacking a “strawgod.” Religion, for Ditchkins, boils down to the attempt to explain the world via appeal to supernatural agent: God, Allah, Ahura Mazda, etc. Prior to the dawn of modern science, such explanations may have made a certain amount of sense. To modify a familiar example: If, while walking on the beach, you came across a working laptop, you might reasonably assume that an intelligent agent created its intricate machinery. The natural world is many orders more complex than the laptop. Without any better explanation at hand, why not think that it, too, had a designer? Better explanations came along: Astrophysics teaches how the world was formed, geology shows how it was shaped, and evolutionary biology reveals our own origins. No more mystery, no more religion.

All wrong, Eagleton argues. Science explains the world, shows how things came to be the way they are. Religion, he insists, asks and answers a different set of questions: “Why [is] there anything in the first place?…Where do our notions of explanation, regularity and intelligibility come from? How do we explain rationality and intelligibility themselves?…Is it a matter for wonderment that we can understand so much of the deep structure of the universe, to no apparent evolutionary advantage?” (11) To blame religion for explanatory irrelevance commits a flagrant category error. It would be, in Eagleton’s words, like “seeing ballet as a botched attempt to run for a bus” (50).

Eagleton’s argument depends on understanding religion and science as two distinct, equally worthwhile spheres of action. Science gives causes, religion provides meaning. The evolutionary biologist can, without any conflict or inconsistency, worship at her local Congregationalist church. This is a pluralistic conception of religion, and within a limited compass, accurate. In certain leafy and pleasant environments, mostly university towns, science and religion stay out of each other’s business. But the Cambridges and Hyde Parks of the world are rare, and Ditchkins is interested in the mean, not the outlier. Fundamentalists, of whatever creed, have small concern for the autonomy of science. Why should they? If religious doctrine is true, it should be true about everything. Think of the concerted effort to undermine the teaching of evolutionary biology: Though we tend to associate creationism with evangelical Christianity in the American South, the campaign is global and pan-confessional. Muslim creationists in Turkey have been especially successful: When asked whether “Humans beings, as we know them, developed from earlier species of animals,” only twenty-five percent of Turkish respondents answered, “Yes.”[1]

If Eagleton’s first argument misfires, his second scores a glancing blow. The “New Atheists,” he points out, ruthlessly criticize religion without ever explaining its conditions or causes. The so-called “avatars of Liberal Enlightenment…have much less to say about the evils of global capitalism as opposed to the evils of radical Islam. Indeed, most of them hardly mention the word ‘capitalism’ at all, however they might protest from time to time against this or that excess” (100). Like a doctor prescribing Tylenol for a brain-tumor induced headache, their critique is both superficial and inadequate.

Eagleton’s argument is an old one. Ludwig Feuerbach in his 1841 The Essence of Christianity revealed each of the tenets of Christianity as misrecognized forms of human self-knowledge. Belief in creation ex nihilo, for instance, expresses a latent belief in the absolute and limitless powers of the human imagination. Feuerbach thought that unmasking religious belief would lead readers to abandon religion for humanism. No, Virginia, there is no Santa Claus. Or Jesus, either. It is the spirit of human cheer, brotherhood, and generosity that really exists.

A young philosopher and journalist living in Parisian exile saw a problem with Feuerbach’s reasoning. Religion, Karl Marx argued, is not simply a matter of belief. The Church attempts to resolve real contradictions, offer a heart in a heartless world. If you want to overcome religion, the conditions that breed it must be identified and overcome. In some highly attenuated sense, Marxism begins from the critique of the critique of religion. Enlightened criticism, Marx recognized, will not in and of itself suffice. Philosophical problems must find practical resolution.

What was true of Feuerbach remains true of the New Atheists: Hitchens and Dawkins criticize the new fundamentalism, but do not reflect on its causes. It is a supremely convenient reluctance. By failing to reflect on the relationship between social reality and fundamentalism, the ambit of Hitchens and Dawkins’s critique remains comfortably restricted. The problem, they suggest, is out there—yokels in the South, terrorists in the Middle East.

Eagleton begs to differ. He insists that the “West’s” destruction of nationalist and socialist political movements helped create the fundamentalist revival. Among others, Eagleton takes the example of

[T]he suppression of the leftist and secular anti-imperialist forces in Iran by the CIA sponsored coup of 1953, which restored the monarchy, eliminated the communists and social democrats, and created a bloodthirsty internal security force. The extreme autocracy of the Shah’s regime, along with its intimate ties to the United States, were later to trigger a radical religious backlash in the shape of the Islamic revolution [that began in] 1978. With the assistance of the CIA, Iran had traveled from a nation which included secular leftists and liberal democrats to a hard-line Islamic state. (103)

In Eagleton’s history, the Left has no agency of its own: It is pure victim. Nothing is said about the failure of domestic or international socialist parties and intellectuals to effectively oppose the rise of Khomeini. It is all America’s fault. Eagleton’s “anti-imperialism” may appear Marxist, but a clear distinction must be drawn. For Marx, religion functions as an inadequate attempt to resolve the contradictions of capital: End capitalism and you will end religion. Eagleton, too, believes that something called “capitalism” spawns religion. But Eagleton’s capitalism appears, in practice, indissociable from “The West” and the “West” functionally indissociable from the United States, and the United States more or less indissociable from the CIA. As Eagleton writes, “One of the best reasons for being a Christian, as for being a socialist, is that you don’t like having to work, and reject the fearful idolatry of it rife in countries like the United States. Truly civilized societies do not hold predawn power breakfasts” (11).

In the increasingly distant past, being a socialist meant belonging to an international revolutionary movement, millions strong. Today, socialism has become a subculture, identity politics for “radical” professors who “reject” America and love to sleep in. There is nothing objectionable about preferring brunch or dabbling in a little “continental philosophy.” Aficionados ought to form Theory Clubs and host bingo nights: loser gets Zizek’s new book. The problem comes with the blurring of personal preference into politics. Buy as many anti-capitalist bumper stickers as you wish, march in as many protests as you can bear: None of this will make you a “revolutionary.” Nothing will, not in the absence of actual international socialist politics.

English plague doctors prescribed smoking of tobacco, carrying around fragrant flowers, and a high dosage of laxatives. If the patient managed to avoid death by diarrhea, the treatments accomplished nothing. Perhaps the semblance of cure offered some small comfort. Today, the plague doctors offer up many different remedies for the dying Left: populist strongmen, community gardens, Lacan. Dr. Eagleton prescribes theology. Apparently, “radical impulses” have migrated to the theology departments, where one can find “some of the most informed and animated discussions of Deleuze and Badiou, Foucault and feminism, Marx and Heidegger” (167). The specific prescription does not matter. Anything will work: the latest continental guru, the latest rebels in the jungle, the latest “economic crisis.” Each provides warm comfort as the Red Death slips in and holds illimitable dominion over all. |P