ONE HAS TO ADMIRE THEIR PERSISTENCE. Labor Notes, the flagship journal of the domestic labor Left, professes itself to be “the voice of union activists who want to put the movement back into the labor movement.” Though stylistically about as riveting as the phonebook, for more than three difficult decades Labor Notes has critically observed and recorded organized labor’s endemic corruption, democratic shortcomings, and gross ineptitude in organizing workers in the private sector, where today only 7.2 percent of Americans are unionized. In a typically journalistic manner, most of these problems are blamed on the perfidy of individuals: union staffers and leaders insufficiently committed to class solidarity and grassroots participation. Similarly, the striking decline in union strength is attributed to deindustrialization and the hypermobility of global capital in the neoliberal age. What is needed, according to this standard Labor Notes narrative, is new currents within the labor movement to bring to power more dynamic actors capable of meeting the challenges of the new century. In his new book Solidarity for Sale longtime labor activist Robert Fitch begs to differ. 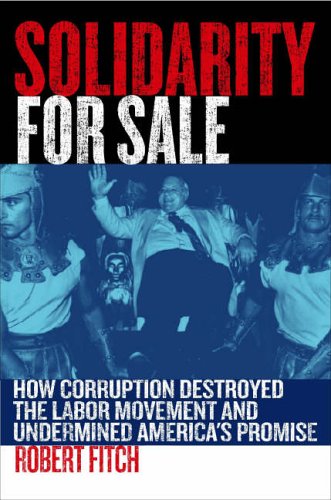 "Corruption," Fitch argues, "flows from the retarded development of American unions, which still haven’t broken out of nineteenth-century models of labor organization" (ix). Modern labor’s rot began at its genesis, Fitch claims. It derives from the exclusionary craft unionism initiated by the American Federation of Labor (AFL). A century ago unskilled workers, minorities, and women were willfully neglected, while mainstream unions opposed even the most rudimentary social democratic legislation to benefit the wider working class. The famous AFL president Samuel Gompers even opposed eight-hour workday legislation on ideological grounds, differentiating the AFL from European unions that he saw as “espousing an effeminate social welfare philosophy as well as a primitive egalitarianism” (40). The AFL was concerned with wages. The mixture of this self-interested "business unionism" and the conditions in certain sectors of the economy like the textile industry, where craft unions predominated and employers were numerically small enough to be cajoled, facilitated the rise of job-control unionism. This rendered workers subservient to union officials doling out jobs, which in turn reinforced an insular culture of loyalty predicated upon fear rather than solidarity. Though defended by many progressives, Fitch sees this uniquely American development as noxious, making domestic unions highly susceptible to penetration by organized crime.

Stretches of Fitch’s account read like a crime-noir novel. Questioning the founding narrative of big labor, a tale that conveniently begins with the struggle for the eight-hour day and ends with the New Deal, Fitch airs dirty laundry with the cheek of a muckraking journalist. While such tales of the corruption and mob-dealings of figures like Sam Parks, Cornelius "Con" Shea, Jimmy Hoffa, and Ron Carey are not entirely ignored by other members of the labor left, they are typically consigned to the realm of anecdotal gossip. In Fitch’s narrative, these are not just the failings of unsavory individuals, but of structurally compromised institutions.

But “job control” is far from a universal feature of domestic unionism. A more fundamental flaw is the functioning of unions as de facto fiefdoms, a result principally of a system of exclusive jurisdictions. For instance, New York City District Council of Carpenters Local 608 is absolute in its rule over much of New York City; it claims the right not only to represent, but to tax everyone who seeks work in carpentry there. The union’s sway is guaranteed by a corporatist pact with capital and the state. When a union makes an agreement with an employer, it is automatically validated by the government with a bargaining certificate, giving the union what amounts to an effective legal monopoly in the carpentry labor market. Fitch argues that "jurisdictional monopolies produce both the powerful and uncritical adhesion of the insiders to their union boss and the weak sense of union identity on the part of the remainder, who become purely nominal members" (329). Rank-and-file workers understandably do not see their unions as belonging to them and are cut off from other workers beyond their jurisdiction, stunting their potential politicization. Debate at the local level, a feature of any vibrant movement, is stifled, generating a top-down movement with grassroots pretensions.

Unlike the stronger European movement, American labor is built around a virtual closed shop, compulsory unionism unknown elsewhere in the world. Though unions cannot technically require membership as a condition of employment, in most states under "union shop" rules, workers are compelled to join the union within their first month on the job. Also uniquely American is the exclusive-bargaining clause in union contracts. This clause prevents workers from selecting the union of their choice. This more than anything else is what explains rapid expansion of the Teamsters in the 1930s: Rather than from their organizing acumen, it resulted from their willingness to offer substandard contracts to bosses threatened by more militant, less corrupt CIO organizers. For decades, men like Hoffa served as capital’s accomplices, undermining militants who opposed the sellout of labor's rights.

But even in its death throes, the American labor left argues that labor's fate depends upon preserving the status quo. It refuses to ask itself the question, Why, then, has the European labor movement been more effective without these idiosyncrasies? Is their bourgeoisie of a kinder disposition or their leaders less susceptible to the blandishments of management? The editors of Labor Notes, in the back cover copy of their well-circulated pamphlet Democracy Is Power, argue that a voluntary system, contrary to the automatic dues system of the United States that sustains our labor gentry, would promote an "individualist and consumeristic approach," where "people could decide whether to pay dues or not based on whether they personally received services they felt were worth the money."[1] This is utterly ludicrous and reprehensible in a book whose stated aim is to "show what member control really looks like, and why it is crucial to labor’s future.”[2] It demonstrates the fact that this breed of reformer operates within the same conservative paradigm as those they claim to oppose. The much-trumpeted Union Democracy movement is too narrowly focused to be of any long-term consequence. It is a symptom of the Left’s dilapidated state that “radicals” do not have the confidence to believe that, under conditions of free discussion and debate, they would be able to sway workers towards the politics of solidarity and class consciousness. This lack of confidence cannot be understood without examining both developments within the capitalist mode of production and the disappearance of the Marxian left over the past decades.

The “golden age” of social democracy has become a figure of nostalgia on the labor left. The 1970s saw industrial nations face the intersection of weak growth and persistent inflation. Capitalism could not cope with low unemployment rates and the wage demands of militant unions. The neoliberal restructuring, far from an insidious Friedmanite plot, was rooted in real contradictions and succeeded on its own terms. The working class was restrained, inflation stabilized, and profit rates restored. Much of the labor Left seeks to re-wage those battles, futilely attempting to reverse the present historical trajectory. The complacent labor leadership, conforming their politics to “Third Way” centrist currents, understands the folly of this better than do many rank-and-file activists. The only way forward out of the present historical impasse is a recovery not only of labor movement dynamism, but, even more importantly, of anticapitalist politics. Without a political Left and its post-capitalist vision there is little to galvanize radicals, much less the wider working class.

Yet despite the social democratic trappings, Fitch’s proposed solution is essentially radical:

Well-rooted, venerable institutions rarely change much because of internal opposition. Martin Luther would have probably not have gotten far if he kept his protest within the Roman Catholic Church.

Warlord systems are especially well adapted to resisting change. For centuries, ruling Afghan and Somalian clans have controlled the good bottomlands, trade routes, smuggling operations, and so on. The resources enable them to recruit selected fellow clan members as clients—chiefly as fighters. Those who aren’t in the clan are deprived by the system. They don’t vote. To include them would be an attack on the entire system. (328)

Fitch recommends a few piecemeal reforms to those fighting within the labor movement, such as the creation of a new and more democratic union press, cutting the number of union officials and transitioning to a model more reliant on volunteer labor, instituting term limits, and allowing union members, not leadership, to decide which politicians get their dues. But, beyond these concrete recommendations, Fitch argues that in order to truly rebuild American unions, radicals must begin at the beginning. "The periods of creativity and growth in the American labor movement," Fitch writes, "have always come when trade unions were challenged from outside—in the 1930s with the rise of the CIO, in the Progressive Era by the Wobblies, and, above all, during the era of the Knights of Labor in the mid-to-late nineteenth century” (337).

Some will question Fitch’s emphasis. His provocative stories of union corruption contrast markedly with standard left-liberal accounts that downplay it, focusing instead on America’s rich history of employer violence and legal obstructionism. More dubious is his closing call for a "historic compromise" between labor and capital in which the latter would give up resistance to worker representation in turn for unions giving up their right to monopoly representation. Though such an arrangement might be in the broad class interest of workers, the nature of the contemporary bourgeoisie and the entrenched labor institutions Fitch devotes the previous 338 pages to reproaching makes the prospect for any such compromise rather remote. The author also seems to reproduce some of his foes’ romantic yearnings for the virtues of 19th century “republicanism” and lacks the global emphasis that not only the principle of revolutionary internationalism, but basic trade union struggle in the neoliberal age, demands.

Fitch’s analysis of the structures of American unions is pitched at a sufficiently structural level as to strike activists currently embedded in the “union democracy” movement as either irrelevant or, if they are convinced by it, disillusioning. If the problem lies at the heart of labor and the task is to begin anew, where are the social forces on the contemporary left capable of such a transformation? Are they even on the horizon? Nevertheless, resistance to capital can only be bolstered by accounts like Solidarity for Sale that contest the reassuring bulletins we have come to expect from the “labor left.” Demoralized by the apparent intractability of the impasse, today’s radicals would do well to internalize the words of A. Philip Randolph, so often echoed by Bill Fletcher, Jr., "At the banquet table of nature there are no reserved seats. You get what you can take, and you keep what you can hold. If you can’t take anything, you won’t get anything; and if you can’t hold anything, you won’t keep anything. And you can’t take anything without organization." Real solidarity will not come easy or without risk. Nor will it come without a renewed commitment to independent class organization. |P