THE NEW TRANSLATION AND REPUBLICATION of Theodor Adorno’s Philosophy of New Music is a further clarification of modernism, necessitated by the latest discontents with postmodernism’s vulgarization, which keeps it at a fictitious distance. Perhaps as his remedy for the most fragmented part of the whole of the arts, namely music, translator Robert Hullot-Kentor has in recent years been steadily reintroducing Adorno’s aesthetic philosophy to English readers.[1] The republication of Philosophy of New Music continues this process, further introducing readers to Adorno’s complex aesthetic theory, also elaborated recently in Current of Music, which embodies Adorno’s aesthetic hopes for the early emergence of radio transmission. Republishing Philosophy of New Music serves the purpose of clarifying a nexus of art history where the relationship between aesthetics and theory could have been drastically reformulated. 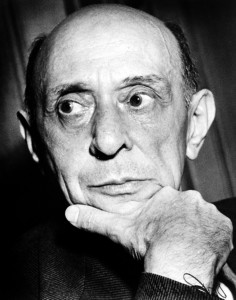 Philosophy of New Music is one of Adorno’s more obscure, niche analyses. Split into two sections comprising intricate dissections of Schoenberg and Stravinsky, it is tighter and less ambitious than Dialectic of Enlightenment, co-written with Max Horkheimer around the same time. However, New Music can be understood as Dialectic’s complement, its object being entangled with that of the culture industry critiqued generally in the more famous volume from the same period. Operating in an inverse way, Philosophy of New Music seeks to exacerbate and expose the same symptoms from within modernist music itself. American readers may have a difficult entry into the text, not only because the writing styles itself on Schoenberg’s esoteric manner of composition, but also because of Adorno’s object of critique, the historical complications provoking the European modernist avant-garde. The text pays strict attention to Schoenberg’s music technique, while delving into historical comparisons to previous composers like Richard Wagner and the regressive, constrictive trajectory implied by their music styles. The volume also incorporates some of Adorno’s most sustained ruminations on the changed significance of the musical “material,” one of Adorno’s most pivotal and least understood concepts for approaching new music as a response to rapidly changing social conditions. As a concept, it seeks to articulate possibilities emanating from the split in idealization and materialization in art—possibilities we now identify as reaching a climax with the music of the mid-century avant-garde that Adorno anticipated.

Philosophy of New Music thwarts the tired criticism of Adorno’s writing as elitist, ambiguous, generalizing, or abstract. His critique of Schoenberg adheres so meticulously to the composer’s actual technique that, in the process, he demonstrates the ability of objective analysis to destabilize an already contingent aesthetic construction by way of acute specificity. Early on, Adorno attacks status quo criticism of avant-garde music: “Amongst the reproaches that [mainstream critics] obstinately repeat, the most prevalent charge is the charge of intellectualism, the claim that new music springs from the head, not the heart or the ear….[Such criticisms] are put forward as if the tonal idiom were itself given by nature….The second nature of the tonal system is an illusion originating in history” (13). Already discernible are the grounds for his more well-known critiques of mass deception through pop music. The simplistic charge of elitism leveled against Adorno’s critique emerges out of bourgeois radical culture itself and represents a failure to comprehend the complicated forms of new music’s material reckoning with tonal idiom. It thus implies an exhaustion of that history’s potential. Bourgeois society’s inability to listen to Schoenberg manifests a disintegration of historical consciousness and the surprising reification of a history (tonal progression) which seemed the very opposite of stasis. For Adorno, a dogmatic concretizing of this tonal illusion pre-echoes the same consciousness pop music is a response to, as its development is bound up in both radical and mainstream aesthetics. This is elaborated in the section “Radical Music Is Not Immune,” where—in a style which itself reflects the formal contortions of modern artists like Schoenberg who “realize total enlightenment in themselves, regardless of the cunning naïveté of the culture industry”—Adorno asserts that “they also simultaneously make themselves like the internal structure of what they oppose and enter into opposition with their own intentions” (16). A relentless train of self-contained, monolithic statements like these, poetically mobilized to question their own truth content, forms the pointilist mimicry that comprises the whole of the Schoenberg analysis. Likewise, the literary technique of connecting immense paragraphs sans line-breaks (identical in form to Samuel Beckett’s contemporary novel trilogy, which Adorno admired) echoes the calculated and monotonous historical transformation from a dynamic music to one of stasis: “the music no longer presents itself as being in a process of development” (50). 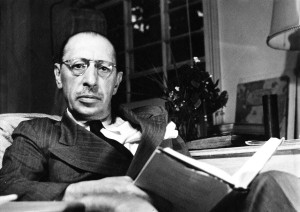 Russian composer Igor Stravinsky (1882–1971), who wrote the ballets The Firebird (1910) and The Rite of Spring (1913). In Stravinsky’s highly structured compositional techniques, Adorno identifies a regressive tendency.

The first part of the book, “Schoenberg and Progress,” introduces the issue of musical style as the hardening against suffering briefly alluded to in Dialectic of Enlightenment. “What radical music knows is the untransfigured suffering of men whose powerlessness has so increased that it no longer permits semblance and play” (37). Schoenberg’s music, in its strict form and restrictive technique, itself expresses the decline of human subjectivity, allowing it to surface only with dire earnestness. Schoenberg’s music embodies Adorno’s modern art philosophy. It exemplifies the true art he so intensely argued for, in contradistinction to the false ideology “innervated” in Stravinsky’s restoration, which allowed a “binding quality” back into the work. Better a rigorous, elitist art exposing the true, complicated bleakness of declining subjectivity than a fantasized, populist escapism. Though neatly divided into two opposed sections, Schoenberg and Stravinsky each express for Adorno the same individual-consuming “apparatus” of society.

Stravinsky represents all the regressive, destructive complications of a solidarity desperate to maintain the illusion of identity. To Adorno, Stravinsky’s music is a calculated mechanism of meandering unintentionality and impressionist lightness (differing from Schoenberg’s heavy sound masses). As a mass ornamentation, it summons the audience to rally together to annihilate their own subjectivity. Adorno dissects how Stravinsky’s music embodies modernism’s paradoxes, incorporating a romanticized primitivism while retaining an impressionist ephemerality of rapidly changing styles. Ritual and sacrifice are significant problems in Stravinsky’s music, and Adorno describes their manipulative function in quelling individual subjectivity, a function that is only heightened by Stravinsky’s mastery of a style that is both the culmination of history and also ironically its own nihilistic undoing. Adorno notes the ubiquitous trend when he suggests that Stravinsky unwittingly strikes the same nerve as the psychologist C. J. Jung: “The search for musical equivalents to the ‘collective unconscious’ prepare for the transition to the establishment of the regressive community as a positive achievement” (121). The same regressive impulse extends to the identification with nature in music: “The pressure of reified Bourgeois culture incites flight into the phantasm of nature, which then ultimately proves to be the herald of absolute oppression. The aesthetic nerve quivers to return to the stone age” (113). Almost unflinchingly, the reader can freely associate Stravinsky’s ritualist spectacle with reprises of the same in contemporary culture (Lady Gaga’s primitive masks embedded in a stylized futurism, and the neo-pastoralism now prevalent in “experimental” drone and electronic folk music, not to mention precious back-to-the-land motifs in contemporary art).

The delusion that Adorno articulates is the same delusion we share today. For this reason, Philosophy of New Music is a primary historical artifact for gleaning the impetus of earlier stages of still-crystallizing collective grotesqueness. At first, readers may interpret this text as mere analysis, uncritically adopting the back-cover’s claim that the book somehow represents Adorno’s “manifesto.” But the more the reader grapples with the criticism the volume contains, the more she begins to understand that this text is more than anything else a manifesto on how criticism could actively participate in and clarify artistic concerns, immanently complicating solidarity between theory and practice. That the text has collected so much dust, and that when divorced from its hopes of intellectual action the manifesto socially degrades into the pure “theory” we today (mis)understand it to be, embodies the tragic failure of Adorno’s emancipatory modernism. |P