IN 1926, HISTORIAN CARTER WOODSON inaugurated “Negro History Week.” Negro History Week bred Black History Month, and Black History Month bred the many diverse “Heritage” months of our American calendar: Women’s History Month, Asian Pacific Heritage Month, Hispanic Heritage Month, and American Indian Heritage Month, to pick just a few. But along the way, the justification for studying history changed. Woodson believed the study of black history could erode racism and cultivate the recognition of human equality. A black teenager studies the accomplishments of Benjamin Banneker and sees that whites have no monopoly on scientific capacities. For Woodson, history teaches the basic irrelevance of racial identity, it schools us in the universality of our shared powers. Contemporary heritage months work for the opposite goal. The point today is to see one’s own specific minority “heritage” as source of power. A young woman studies Elizabeth Cady Stanton and learns to take pride in her womanhood. 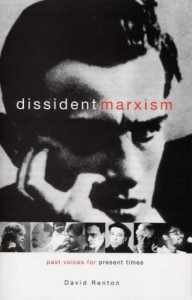 David Renton does not propose creating Marxist Heritage Month, but his Dissident Marxism attempts to offer up a usable past for young activists. During the anti-globalization protests of the late 1990s, Renton noticed that the activists, while full of passionate intensity, have no sense of history. To translate into the language of identity politics, the activists lack pride in their own heritage. They are not even sure what that heritage is. Dissident Marxism attempts to demonstrate how Marxism could serve as that heritage.

There is an obvious problem with such a project. For much of its history, Marxism operated as a craven justification for state coercion and control. The security of the “dictatorship of the proletariat” demanded the creation of the Gulag Archipelago, and the construction of the Berlin Wall. Stalinist “scientific socialism” has little appeal to the Change-The-World-Without-Taking-Power generation. One strain of Marxism managed to resist deployment as state ideological apparatus: Trotskyism. But while many of the figures discussed in Dissident Marxism share a background in the Left Opposition and Fourth International, Renton insists his book is not a history of Trotskyism. Such a history would not instill anyone with pride in Marxism. Splits within splits, fractal sectarian lineages, recurrent rightward shifts, endlessly creative styles of opportunism, and cultish personal pathologies do not make for a workable heritage.

How to make a lovable history out of a seemingly unlovable ideology? Renton creates the category of “Dissident Marxism” and proceeds to offer portraits of fourteen alleged Dissident Marxists. We start off with some less “compromised” Bolsheviks (Vladimir Mayakovsky, Alexandra Kollontai, and Anatoly Lunacharsky), progress through the orbit of early Trotskyism (Victor Serge and Georges Henein), and dip into the Marxist English historians (Dona Torr and E.P Thompson.) From there, we take an extended detour through Third-Worldism and the Third World (Paul Sweezy, Paul Baran, and Walter Rodney), and finish up in the passionate and narrow world of Thatcherite Trotskyism (David Widgery). There are, for good measure, chapters on Karl Korsch and Harry Braverman.

At some vague level of abstraction, this is useful work. Through the stubborn recitation of biographical detail, we can keep the memory of the dead with us. But Dissident Marxism tries to be more than “mere” biography. Renton wants to cordon off fourteen dead Marxists, claim them as “dissidents,” and offer them up to young activists as a “heritage.” And there lies the problem.

To clump these figures together inflicts great violence to their individual positions and trajectories. Karl Korsch would not have recognized Walter Rodney’s Pan-Africanism as Marxism of any sort. Renton insists that his figures all “opposed a global society that was based on mass exploitation, and also rejected the two bureaucratized left-wing ‘alternatives’ of Stalinism and social democracy” (3). But this is to subsume fourteen radically different thinkers under the vague label of “anti-authoritarianism.” Alexandra Kollontai recognized herself as an orthodox Marxist, and worked to defend the authority of the proletariat movement against “dissident” bourgeois feminism. Kollontai’s defense of orthodoxy may appear heterodox today, but this is only a sign of how much has been lost.

But Renton misses the obvious: the near-total collapse of Marxism over the long 20thcentury. Dissident Marxism begins with Lunacharsky, the USSR’s Commisar of Enlightenment, running the education system of a state of 200 million, and ends with David Widgery helping organize rock concerts to protest David Bowie’s outlandish quasi-fascism. From power to protest, here is the history of Marxism’s last century. Renton does not explain, or even acknowledge the regression. Nor could he. To recognize the radical loss of possibility means acknowledging that the Marxist legacy is fundamentally problematic. It means recognizing that Marxism may not be a heritage for young activists to take pride in.

But Marx did not intend to provide ideology for an activist minority. Communism, he argued, would be the first political movement of, by, and for the whole of humanity. It would be an anti-identity politics. The workers of the world come to recognize their own “class identity” as a kind of bondage. Being a “worker” means living in subjection. And so they organize, seize political power, overcome capitalism, abolish wage labor, and emancipate themselves and the rest of humanity.

This, at least, was Marxism, or a highly abbreviated version of it. It has, to the date, failed. If they study Marxism’s history, young activists will find defeat, confusion, diminution, betrayal, and regression. This past will not “empower” any young activist. But perhaps this is the reason to study it.

Baron Münchhausen led a mildly exciting 18thcentury life. He joined the Czar’s cavalry, and fought in the Russo-Turkish war. Late in life, Münchhausen transfigured these mildly exciting exploits into wild adventures. He claimed to have wrestled bears, pulled himself out of a swamp by his own bootstraps, and visited the moon twice. The actually existing Left suffers from political Münchhausen syndrome. Faced with powerlessness and creeping obsolescence, leftists find adventure and danger in the smallest demonstration, the most local causes. When actual revolution becomes unthinkable, everything becomes revolutionary.