WHAT DOES IT MEAN TO SAY, as Platypus does, that the Left is dead? And what does it mean to speak of the history of the Left postmortem? Our task is to address these questions.

First, we might consider how these questions shaped the formation of Platypus’s ideas and activities. Platypus began as a reading group held at the School of the Art Institute of Chicago. This group was brought together by a shared realization that the social and cultural theory of Theodor Adorno and other members of the Frankfurt Institute for Social Research contained the legacy of the revolutionary Marxism of the antecedent period. This realization was coupled with another: To claim that Adorno’s theoretical ideas were the legacy of the practical politics of Lenin, Luxemburg, and Trotsky put Platypus at odds in numerous respects with the existing Left.

In the present, the Left has turned away from the question of how the defeated revolutionary Marxism of the first and second decades of the twentieth century continued through mid-century in the Frankfurt School. For the Left, Frankfurt School Critical Theory is seen as a justification for abstention hiding behind a critique of participation, whereas the prevailing conception of revolutionary Marxism is of a ruthless actionism, in which the ends justify any means. Beneath these one-sided conceptions lies a greater problem, which has existed openly since at least Marx’s time, that theory and practice appear counterpoised and yet inseparable. Also since Marx’s time, the Left is best identified as the transformative force in history that directly addresses this problem, although it often does so blindly and ineffectually. This problem of the relation of theory and practice was at the center of Marx’s politics, and the best of the Marxist tradition, up to Adorno and the Frankfurt School.

The failure to address the relationship between Critical Theory and revolutionary Marxism evinces a deeper failing of the contemporary Left. The need to address the problem of relating theory to practice has been nullified by turning theory and practice into two oppositional camps. Even when theory and practice are said to coexist, it is apparent that this simply means that one is subordinate to the other.

By falsely resolving the problem of theory and practice the Left has relinquished the defining feature of its politics and ceased to be the Left at all. This has profound effects on the development of the history of capitalism in which the Left traditionally has acted as a transformative catalyst. Because its politics no longer mediate theory and practice, the Left has begun to decompose. Following Adorno, Platypus calls this process historical regression.

Therefore, the beginnings of Platypus’s intellectual investigation posed the political task of critiquing and eventually overcoming the existing Left, which had become willfully oblivious of the necessity of working through the problem of relating theory to practice. However, this task is not accomplished by merely identifying it. The existing Left’s neglect of the problem has led to the accumulation of layers of rationalizations and excuses for carrying on as if nothing were wrong. This has buried the problem deep beneath the surface of today’s Leftist politics. Platypus exists to clear away the sediment. The group was founded in 2006 to foster debate and discussion on the Left concerning the question: How has it come to pass that the Left is dead, and how might we, in this situation, make good on the slogan “Long live the Left”? |P 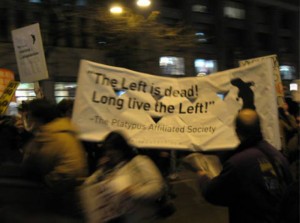