THE ABANDONMENT OF EMANCIPATORY POLITICS in our time has not been, as past revolutionary thinkers may have feared, an abandonment of revolution in favor of reformism. Rather, because the revolutionary overcoming of capital is no longer imagined, reformism too is dead. As the task of achieving human society beyond capital has been abandoned, nothing worthy of the name of politics takes its place, nor could it. The project of freedom has now altogether receded from view. For, while bourgeois thinkers like Hegel were no doubt mistaken in their identification of capital with freedom, they nevertheless grasped that the question of freedom only poses itself with reference to the capital problematic. Realizing for the first time a noble savagery that never was before, contemporary humanity is sunk in the immediacy of second nature.

The year 2001 itself arrived late and now it, too, has slipped into the past. Still, it retains its significance as the moment when the light of freedom was definitively eclipsed, when mankind ceased to be able to discern whether or not night had fallen. For, since 2001, all recognize that we now live in what the Marxist thinker and critic of the New Left, Moishe Postone, has termed the “time of helplessness” (or, as the Spartacist League more colorfully describes it, the “senile dementia of post-Marxism.”) Though time continues to pass and, in some sense, continues to intensify, history—understood as the time when the tasks of freedom can still be performed—seems to have come to an abrupt, late-afternoon halt. This has caught most on the Left unawares, though one suspects a widespread relief among many that the task might finally be abandoned, for good and all.

Accumulated into the year 2001 is what precedes it in time, a mass of folly and wasted opportunities that may be disaggregated into three constituent moments. Each of these three stages in the “death of the Left” conveniently ends in the digit 9: 1979, 1989, and 1999. Each represents a stage in a process of retrogression that culminates in what is, after all, a crisis far more portentous than the current economic crisis that so dominates our discourse: the crisis of the Left, whose prospects for recovery are, at this stage, very grim. Rather than a crisis date in the history of the Left, 2001 is therefore the year in which the crisis of history became clear, though few noticed, and when it became unmistakable, though few caught the scent, that what passes for the Left today is a “stinking corpse.” It was the year in which the founding of Platypus became a necessity, though, here again, consciousness lagged behind events. 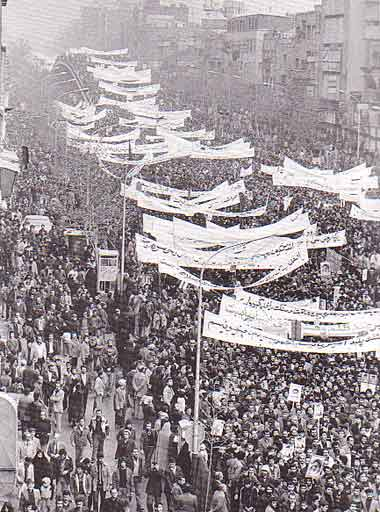 Demonstration during the Islamic Revolution in Iran, 1979.

The Iranian Revolution in 1979 was and remains a catastrophe. Since the triumph of the Khomeini-ites the country has been dominated by a regime far more backward and repressive than its predecessor, governed in a manner even more reactionary than the way the country was governed under the Shah. With the Stalinist Tudeh Party subordinating itself to the Khomeini faction, the road to Islamist power was paved with the corpses of betrayed Iranian workers and self-betrayed Stalinists, even as the Western Left drowned out all dissent with its loud applause for the blow dealt to American imperialism. As the Iranian unorganized urban masses and the landlord class joined hands under Islamist leadership to crush the Tudeh Party and other leftist groups, the Left of the core capitalist states, hopelessly deluded by a specious Third Worldism, failed almost entirely to recognize the unfolding catastrophe. As David Greason has observed, prior to the Iranian Revolution most had simply assumed that any movement able to oust the Shah would have to come from the Left.[1] The actuality of Khomeini-style Islamism as a reactionary ideology, rather than an authentic “cultural expression” of the masses, was denied, and instead the Western Left acquiesced in the elevation of Khomeini’s mullahs to a dominant position in Iran. The Left was incapable of recognizing in Khomeini, who was hailed as a unifier, a threat no less grave than the Shah himself had been. Substituting criticism of American imperialism for the critique of capitalism, dominant strands of the New Left reshaped anti-Americanism as the touchstone of Leftist thought. This rendered impossible an adequate analysis of the Iranian Revolution, and of the Mujahideen’s “resistance” to the Soviet intervention in Afghanistan as well. In place of an adequate analysis of the Iranian Revolution, defeat was transmuted into “victory” by the conjuring tricks of the New Left. It was an act of self-deception that had, by this time, become almost second nature for a generation that, despite its professions of anti-Stalinism, still worshipped the Stalinist idol of the accomplished fact. Accordingly, icons of the New Left like Michel Foucault saluted the Islamic Revolution as representative of a new “spiritual” politics, supposedly free of the instrumental rationality operative in both East and West during the Cold War. 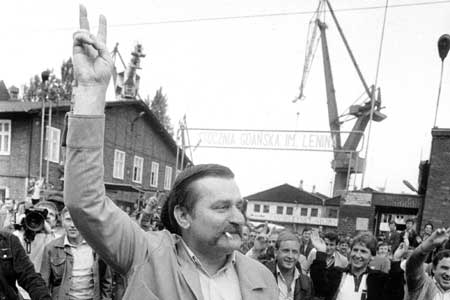 Lech Walesa leaves the Gdansk Lenin shipyards to prepare for his meeting with John Paul II.

Other events circa 1979 that registered the degradation and disintegration of the Left were its uncritical responses to the Solidarnosc movement in Poland, and the Mujahideen’s resistance to the Soviet intervention in Afghanistan, both of which found support among a disoriented Left, with slogans—now forgotten in embarrassment—of “Ten million Polish workers can’t be wrong!” and "Allah-u-Akbar!" The Left failed to recognize the conservatism manifesting before their eyes, the right that they themselves joined. Indeed, by 1979, it was by no means clear, even to leading thinkers of the New Left, how the project of freedom might be advanced. Fred Halliday reports a conversation he had with fellow New Left Review editor Tariq Ali, with whom he was politically parting ways, in which he told Ali the following: "God, Allah, called the two of us to His presence and said to us, ‘One of you is to go the Left, and one of you is to go to the Right.’ The problem is, He didn’t tell us which was which, and maybe He didn’t know Himself.” Halliday then adds, “Tariq laughed. He understood exactly what I was saying, and he didn’t dispute it.”[2]

The practice of self-deceit, uncritical celebration of supposed revolts against reification, and the retreat from the project of freedom, was again in evidence in the second stage leading up to 2001, the collapse of the Soviet Union in 1989. As the final, anti-climactic collapse of the failed attempt to overcome capital launched in 1917, the rightward fall of the Soviet Union was remarkable for its failure to prompt serious reconsideration on the Left. Instead, it was heralded as a rebirth of freedom, as though what happened were not the institution of neoliberalism but the de-Stalinization of the revolution. With scarcely a thought respecting the now definitive failure of the trajectory of the October Revolution that conserved, in however degraded a form, the emancipatory impulses of Marx, Engels, Luxemburg, and Lenin, the zombie-Left in 1989 congratulated itself on yet another supposed accomplishment of 1960s-style anti-authoritarianism. Celebrating what it ought to have analyzed, dominant strains on the Left helped legitimize the neo-Tzarism that rose on the ruins of Soviet Russia. Mirroring Marxism’s degeneration in the Soviet Union to an ideology affirmative of the status quo, and in place of the realization of the emancipatory potential of capitalism, in 1989 capitalism itself was celebrated as emancipation.

The third phase in the total exhaustion of the Left that culminated in 2001 comes in 1999, the year of the anti-globalization protests in Seattle. This event marked the triumph of our current “post-political” activist culture, what Liza Feathersone, Doug Henwood, and Christian Parenti have termed “activist-ism.”[3] As Platypus members Ben Blumberg and Ian Morrison have observed, with respect both to activist-ism in general and the new anarchism that dominated proceedings in Seattle in particular, “Today’s protesters celebrate simple altercations with the police as victories… Each blow of the truncheon dramatizes the difference between protesters [and the society to which they are being integrated].”[4] It is not unfair to say, they argue, “Protesters elicit a police beating to sensationalize their own submission to authority.”[5] Here, the regression already in evidence in the 1960s has reached full flower. 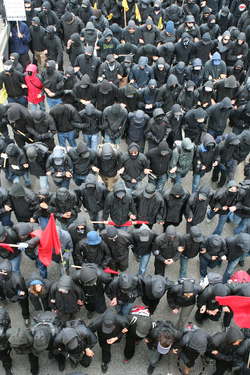 Reenacting not only the defeat but the defeatism of the 1960s Left, the Seattle protesters no longer even bother with the old talk about students or youth as a new “revolutionary force.” Nor do these new would-be radicals require elaborate rationalizations of their failure. Theirs is a disarmingly frank acting-out of a discontented middle-class youth, for whom the schedule of international trade meetings takes the place of rock concert tours as the site for a peripatetic anti-authoritarian subculture. This generation of activists fulfills rather than rejects the low expectations of their political parents, namely that they should either numb themselves with the pleasures on offer in neoliberalism—“sex, drugs, and rock ’n’ roll”—or else engage in revolution “for the hell of it.” Only, in the new protest culture, one can do both at the same time, achieving in the process only the sensationalizing of one’s own submission to authority and social integration of which Blumberg and Morrison speak. Politically, the embrace of the cult of death that characterized the dominant Leftist response to 1979 reaches its anti-climax in the full-blown Romantic-reactionary rejectionism, anti-modernism, and anti-globalization of “black bloc” anarchism and “turtle protest.”

The historic Left of bourgeois radicalism, culminating in Marx’s auto-critique of utopian socialism, isolates history as its problematic and freedom as its project. As Marx realized, capitalism posed a question that could only be answered by the overcoming of capitalism. In a similar vein, Postone has argued that proletarian society, the society of commodity-producing commodities, “points beyond itself.” But regression has advanced so far now that critical recognitions such as Postone’s are the affair of only a handful of intellectuals, while the labor movement, the necessary condition for the practical politics of the Left, is in full-scale rout globally. The point of saying this plainly is not simply to voice a knowing pessimism, but to recognize the actual character of our times. Platypus harps on the “death of the Left” in order to begin the work of rebuilding. After all, the reconstitution of Critical Theory, the specific task to which Platypus is devoted, does not occur in conditions of our own choosing, but in conditions we inherit from the past. Indeed, theory can be reformulated not by supplementing new bits to rectify the supposed inadequacies of past theory, but only by actually working through of the history of the Left. |P