30 Years of the Islamic Revolution in Iran

The Tragedy of the Left 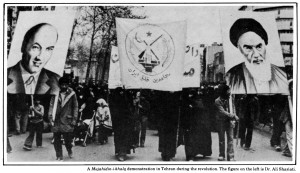 Ervand Abrahamian Professor of History at Baruch College, CUNY and author of Iran: Between Two Revolutions, 1982

Hamid Dabashi Professor of Iranian Studies and Comparative Literature at Columbia University and the author of Iran: A People Interrupted, 2007

By tailing after events, the Left betrays its revolutionary history. The Iranian election protests of the last three months have been no exception. Leftists have hailed the amorphous social upheaval in the streets of Tehran as a step towards the transformation and progressive â€œevolutionâ€ of Iranian society. Yet, however optimistic this position may sound, celebration without understanding only obfuscates our political situation. Undoubtedly, the Left today should demand the overthrow of theocratic regimes. But here is the importance of ideology: how the regime is overthrown â€” who participates in this act and how they understand their political practice â€” has real effects. In 1977-79, the international Left overlooked this problem by uncritically supporting those seeking to overthrow the Shah. In so doing, the Left helped a right-wing popular movement establish the theocratic dictatorial government the protesters fight against today. How are we as leftists to make sense of this political failure so as to help rebuild an emancipatory Left today? In the spirit of renewal, Platypus asserts that if the Left is to change the world, it must first transform itself!

1. 30 Years of the Islamic Revolution: An Interview with Ervand Abrahamian

2. The Failure of the Islamic Revolution: The nature of the present crisis in Iran

IMG caption:Â  A Mujahidin-i-khalq demonstration in Tehran during the revolution. The figure on the left is Dr. Ali Shari'ati