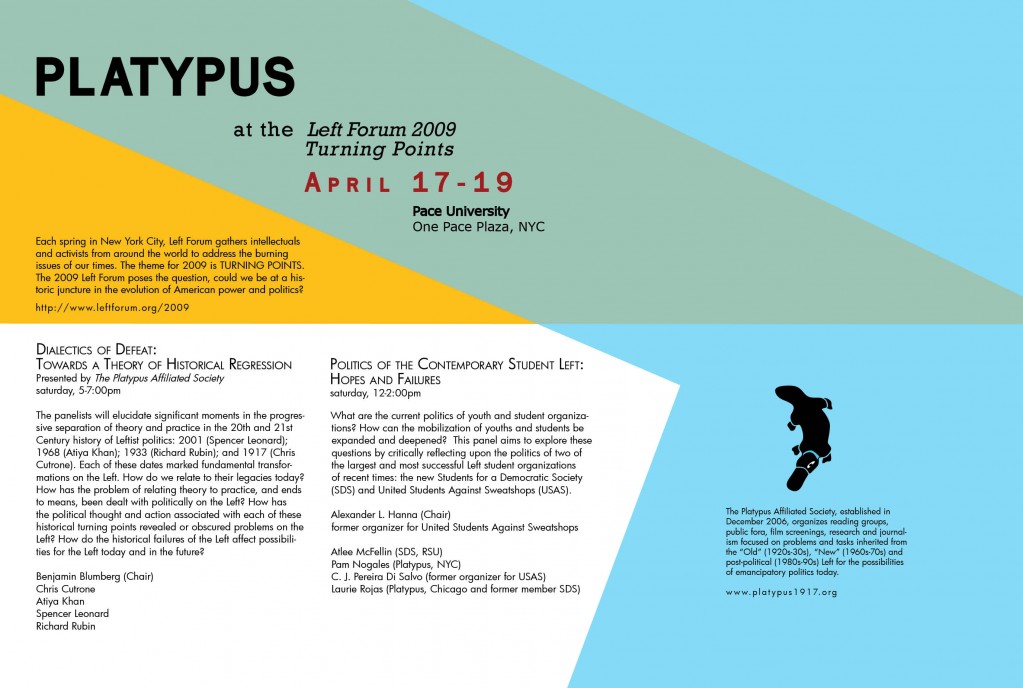 "Each spring in New York City, Left Forum gathers intellectuals and activists from around the world to address the burning issues of our times. The theme for 2009 is TURNING POINTS. [...] The 2009 Left Forum poses the question, could we be at a historic juncture in the evolution of American power and politics? [...] Left Forum provides a unique space for the generation of ideas crucial to theorizing and building a resurgent Left. This year the Forum will include participants from all corners of North America, as well as Asia, Africa, Europe, and Latin America. It will truly be a rare opportunity for a global left dialogue."

Dialectics of Defeat: Towards a Theory of Historical Regression

Presented by The Platypus Affiliated Society

The panelists elucidate significant moments in the progressive separation of theory and practice in the 20th and 21st Century history of Leftist politics: 2001 (Spencer Leonard); 1968 (Atiya Khan); 1933 (Richard Rubin); and 1917 (Chris Cutrone). Each of these dates marked fundamental transformations on the Left. How do we relate to their legacies today? How has the problem of relating theory to practice, and ends to means, been dealt with politically on the Left? How has the political thought and action associated with each of these historical turning points revealed or obscured problems on the Left? How do the historical failures of the Left affect possibilities for the Left today and in the future?

An edited transcript of the presentation is available here.

Politics of the Contemporary Student Left: Hopes and Failures

Young people's heightened participation in politics in the run-up to the election of Barack Obama was crucial to his election and cannot be ignored. The burning post-election questions that the Left must answer are 1) what are the current politics of youth and student organizations and 2) how can the mobilization of youths and students be expanded and deepened? This panel aims to explore these questions by critically reflecting upon the politics of two of the largest and most successful Left student organizations of recent times: the new Students for a Democratic Society (SDS) and United Students Against Sweatshops (USAS). The panelists engage these organizations by examining the various perspectives currently influencing them, and explore how these ideas affect their means and ends. This requires us to delve into their current politics, principles, and practice with relation to the history of Left student activism, as well as the history of the Left as a whole. We hope this panel will not only provide insight into the failures of the student Left, but also begin a serious discussion within these organizations and the Left at-large of what the revolutionary potential of such struggle can be.

An edited transcript is available here.